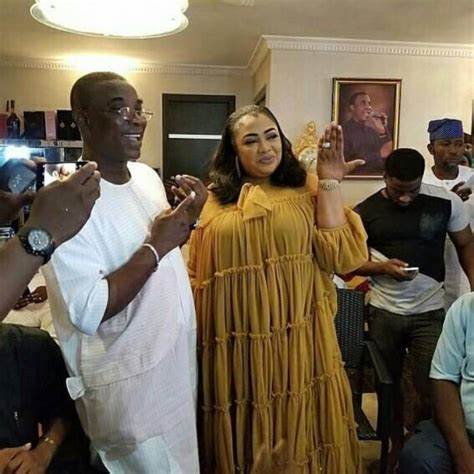 King Wasiu Ayinde Marshal, also known as KWAM1 and his estranged socialite wife, Titi Masha have settled their rift. They duo were re-united by concer

King Wasiu Ayinde Marshal, also known as KWAM1 and his estranged socialite wife, Titi Masha have settled their rift. They duo were re-united by concerned friends of the socialite who gathered to ensure peace between the music icon and Titi.

A sneak peak of what transpired during the meeting organized in order to settle the rift between the singer and his former wife, Masha surfaced on the internet last week. In the video, the two former love birds took pictures together for the first time since they went their separate ways. They also shared a light hug before the music star left the venue of the peace keeping meeting. At the background in the video, some voices were heard saying that the duo should no longer engage in any bickering since Masha is a mother to three of KWAM1’s over 30 children. Fans are hopeful that the peace keeping mission will indeed be fruitful and the two lovers will resume their public display of love like in the time of old.

The affair between KWAM1 and Titi who is a popular socialite and cloth merchant started after Yewande, one of KWAM1’s wives relocated to Canada. Titi met him at one of his events after she was introduced to him by a socialite Gbenga Akinbobola aka Gbenga Islander. Gbenga was not only KWAM1’s friend at that time, he was Titi’s lover too. However, Titi ended up dumping her lover for his friend, KWAM1.  The two took their affair to the next level when they tied the knot in his palatial Ijebu Ode, Ogun State home in 2017. The two had three children before KWAM1 left her for another woman, Emmanuel Ropo whom he married late 2021.

Before things degenerated so badly between them, Masha was the apple of K1’s eye. He would sing her praises to high heavens anytime they were at parties where he was the guest performer. He even granted an interview where he revealed that his wife doesn’t listen to hear-say and they both shared a level of understanding that has kept their union solid.

Unfortunately, KWAM1 could not supress his unquenchable appetite for beautiful and well-endowed women. It turned out that his new wife, Emmanuella was a loyal client of Titi who would always sing Emmanuella’s praises for always patronising her. But you know what they say about karma. Titi got served with the same ‘spoon and plate’ she served her ex lover and KWAM1’s friend, Gbenga Islander. However Titi couldn’t take what she dished out. She felt insulted and betrayed that her husband could go after her customer turned friend and she made a scene about it. She confronted her husband and things just went sour between them.

Unperturbed by Titi’s reaction, KWAM1 carried on and legalised his marriage with Emmanuella. Expectedly, Titi’s friends who were not happy with the way their friend was treated threatened to disrupt their wedding and predicted the early demise of the marriage. In fact on the day of the wedding, KWAM1 ensure there was a heavy presence of security men to prevent any embarrassment. The wedding done and dusted, Titi’s friends did not relent as they took to social media to spread false news about the music icon turning Emmanuella into a punching bag, an allegation the newly weds denied.

Loading...
Newer Post
My dad advised me to give out all that money donated to me by fans, friends – Davido
Older Post
Trouble in paradise as Gideon Okeke’s marriage experiences hiccups