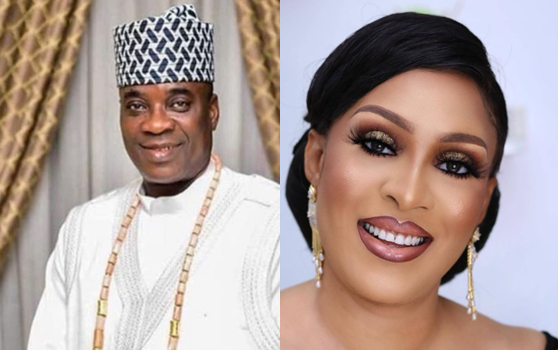 Like most entertainers, King Wasiu Ayinde Marshall 1 makes no pretense about his love for women, most of who willingly throw themselves at him. The Ma

Like most entertainers, King Wasiu Ayinde Marshall 1 makes no pretense about his love for women, most of who willingly throw themselves at him. The Maiyegun of Yorubaland not only embraces openly, anyone that catches his fancy, he is financially capable of taking care of these women and the about 40 children sired from his relationships with them.

However, his philandering nature must have been too much for Yewande, his only legal wife at a certain time in his marital life, to bear, prompting her to relocate to Canada. In no time, KWAM1 quickly found her replacement in Nigeria and formalized his relationship with socialite and fabric merchant, Titi Masha.

Prior to hooking up with KWAM1, Titi was married to businessman, Tunde Bashua. The union produced three children before Titi dumped him for Lagos based socialite, Gbenga Islander, a friend and a benefactor to KWAM1, before she finally made a beeline for KWAM1. With the way they both carried on in public; KWAM1 eulogizing her at every given opportunity and Titi being overly protective of him, it therefore came as a surprise when the Fuji singer decided to displace her with Emmanuella Ropo as the apple of his eyes.

Tall, fair skinned and extremely beautiful, Emmanuella Ropo is a businesswoman who runs Party Dreams, a children’s supply store at Omole Phase 1 area of Lagos. The Will reports that like Titi, Emmanuella is a mother of four from different fathers. But that of course is the least bit of Maiyegun’s problems. He is smitten by her and his friends and close associates have quickly aligned with him as it concerns her.

She was recently introduced to Oba Saheed Ademola Elegushi, the Elegushi of Ikate land as the latest addition and they both got a royal blessing for their union. On hand to receive KWAM1 and his new wife at the palace along with Oba Elegushi were his wife, Sekinat Elegushi, Akinsiku of Lagos, Oba Dosunmu and a commissioner in the government of Governor Bababjide Sanwoolu, Chief Anofi Elegushi, the commissioner for Home Affairs.

But Titi is heart broken. She feels shortchanged especially because one of her aunts, Alhaja Shalewa, was KWAM1’s ex wife and despite opposition from several quarters, KWAM1 and Titi legalized their relationship. Titi had thought that at over 60, he would have lost the urge for beautiful women and she would remain the apple of his eyes till thy kingdom come. Unfortunately, her expectation backfired.

Ironically, her heartbroken state is nothing compared to the disappointment emanating from KWAM1’s numerous concubines who have resorted to a smear campaign to denigrate Emmanuella Ropo for coming to take the spotlight and reduce their shine. They have vowed to do all within their powers to ruin things between her and KWAM1.