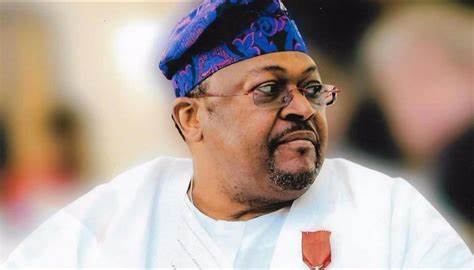 Like most wealthy Nigerians who show off a semblance of wealth while owing banks, institutions and companies billions of money in varying currencies,

Like most wealthy Nigerians who show off a semblance of wealth while owing banks, institutions and companies billions of money in varying currencies, Otunba Mike Adenuga is shockingly in a class of his own.

The businessman who is the third Nigerian on the Forbes list of billionaires for the year 2022, has a mountain of debt, so high he is allegedly known to be notorious for refusing to pay them off despite several moves to get him to.

His increasing debt profile makes one wonder how he got ranked on Forbes, the luxury lifestyle magazine, even though the American magazine claims his net worth jumped by almost $5 billion in the last year.

How credible that information is despite his debts and tax defaults, leaves much to be desired.

His chronic indebtedness has hit some of his creditors so hard that they had to shut down some of their operations.

For instance, his ConOil firm owes a combined debt of over $140.5 million to two foreign and one local companies.

Despite making several pledges to pay, PremiumTimes is reporting that ConOil and some of his other companies have reneged on paying the debts.

One of such companies is Depthwize, a local oil servicing company, which is owed $40 million by ConOil.

The refusal of the management of ConOil to pay Depthwize, a small drilling contractor, has forced the company to lay off workers and shut down services on two of ConOil’s rigs until the money is paid, those familiar with the matter said.

Things are said to have gotten so bad that some of the creditor companies have either commenced or are considering commencing legal actions to force him to pay up, having exhausted all options to make him honour promises and agreements to do so.

Similarly, an American oil and gas firm, Baker Hughes, was forced to lodge a court petition to wind up one of Adenuga’s companies, Belbop Nigeria Limited, over the sum of $12.09 million which it has been trying to get the company to pay.

Baker Hughes argued that in 2009, Belbop awarded it a contract for the provision of directional drilling, MWD/LWD services and supply of drilling fluids and drilling bits, logging cabin and surface acquisition system.

The company told the court that after it duly discharged its obligation and rendered all requisite services, Belbop refused to pay. Baker Hughes said it incurred a liability of $9.4 million in the course of executing the contract.

On April 12, 2016, Babs Kuewumi of the Federal High Court in Lagos placed an interim injunction on the accounts of Belbop, pending the determination of the suit.

The judge therefore appointed the Chief Registrar of the Federal High Court as the receiver/manager of Belbop until the substantive suit is determined.

Adenuga is also causing multinational oil firm, Total, headache over a $28.5 million debt it owed the French oil giant since 2009.

Although Total is trying to resolve the debt problem without litigation, the refusal of Mr. Adenuga to pay the debt has forced the company to stop work on the OML 136 gas field.

Total is ConOil’s technical partner in the project.

But those familiar with the matter said Adenuga’s company was yet to pay up.

All attempts by Total to make him release the money failed.

Some said they were baffled by Adenuga’s refusal to pay Total the $28.5 million, which would have seen work commenced on the lucrative oil field.

The OML 136 asset is considered one of the largest gas fields in Nigeria, with a proven reserve of 11 trillion cubic feet (TCF) of gas.

The exploration of the oil assets can boost Nigeria’s economy by creating jobs and would have yielded massive return to Total and ConOil, experts say.

When contacted, Total’s spokesperson, Charles Ogan, in an email to PREMIUM TIMES, said the matter was an “obvious internal administrative subject.”

Also, ConOil is engaged in a decade-long dispute with British oil firm, Vitol, over its alleged failure to pay a $60 million debt incurred from lifting of cargoes of refined petroleum products.

Vitol secured a court judgement in the UK in respect of the debt but has been unable to enforce it in Nigeria because ConOil got a stay of execution from a Nigerian court.

ConOil financial problems may have been caused by Adenuga’s slowness in taking advantage of potential money earners for the company, insiders allege.

They cite ConOil being granted exploration license in 2005 for OPL 257 by the federal government, but the company surprisingly left the block fallow until its licence expired.

Now it is asking the government for a two-year extension of its expired licence to enable it explore the field.

On January 22, 2016, Taiwo Olushina, the managing director of ConOil, wrote a letter to the National Petroleum Investment Management Services (NAPIMS) blaming insecurity, high cost of drilling and technical hitches for its failure to explore the field before the expiration of the licence.

Adenuga’s companies have also had tax issues in the recent past.

In 2009, the Federal Inland Revenue Service (FIRS) sealed the Lagos offices of ConOil, and Continental Oil and Gas, another company owned by the businessman, over the non-remittance of $610 million tax to government.

Last month, seven years after his companies were first sealed, the FIRS shut the Lagos offices of Globacom, the second largest mobile telephone company in the country, owned by Adenuga for allegedly failing to remit Value Added Tax worth N24.3 billion.

Earlier in February this year, the Osun State Internal Revenue Service (OIRS) sealed the offices of the telecommunication firm in the state for failing to pay outstanding taxes and other levies in respect of mast/base stations and laying of fibre optics.

The state said several meetings were held with the company’s representatives in the past three years to resolve the issue, but that the company failed to comply.

The Asset Management Company of Nigeria (AMCON) also listed Adenuga as one of the country’s biggest debtors for a N2.4billion loan his real estate company, Convenant Apartments Complex Limited, took from Wema Bank.

AMCON acquired the loan from the bank in 2010, after Convenant Apartments failed to pay up.