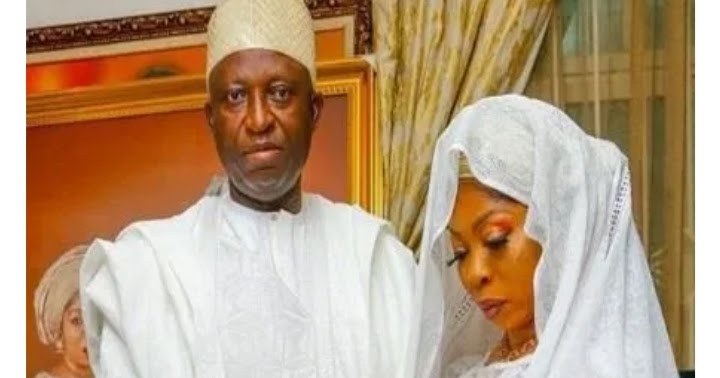 While family and friends  such as former president Olusegun Obasanjo and for minister of industry, Adenike Akande rallied round her during the installation and the after party, conspicuously missing from the celebrations was her husband of nearly two years, Hakeem Odumosu, the immediate past Commissioner of Police in Lagos.

Odumosu who is supposed to be by her side didn’t make his appearance at the party. The programme of event and backdrop pictures also did not indicate that the wealthy business woman still bears her husband’s name. The name, Odumosu was boldly omitted everywhere.

His absence may not be unconnected to the alleged trouble brewing in their once peaceful paradise. Modupe Haastrup, a former partner of Justice Adesola Oguntade, the retired High Commissioner to the United Kingdom, is alleged to have caused the trouble in the Odumosu’s home. She is an alleged old flame of the retired commissioner who allegedly took a break from the romantic dalliance after hooking another moneybag in the person of the retired Justice.

After her relationship with the legal luminary crashed, she took off to renew her relationship with her old lover, Odumosu and caused a rift in Odumosu’s marriage to Omotade. Folashade who plays big in the oil and gas sector was conferred with the title by his Royal Highness, Oba Adedotun Aremu Gbadebo III, the Alake of Egbaland due to her contribution to the development of Egbaland as an indigene of Ogun State.

Princess Folashade Omotage was born in Ghana, though a native of Ogun State. She later relocated with her parents to Nigeria where she continued schooling. She attended Obafemi Awolowo University where she studied Sociology and later pitched her tent in the business world.