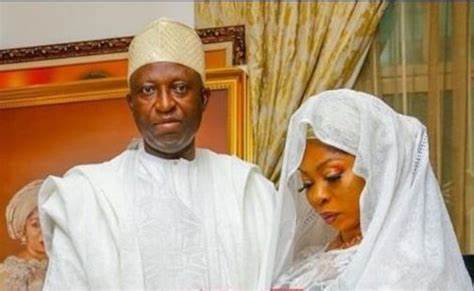 The barely two year old marriage of Hakeem Odumosu, the immediate past commissioner of police, Lagos State and Folashade Omotade, the widow of Olaseni

The barely two year old marriage of Hakeem Odumosu, the immediate past commissioner of police, Lagos State and Folashade Omotade, the widow of Olaseni Omotade, a former permanent secretary who died in the Bellview crash of 2005, is allegedly experiencing some hiccups.

Modupe Haastrup, the former partner of Justice Adesola Oguntade (retd.), a former High Commissioner to the United Kingdom, is alleged to be the cause of the hiccups in the marriage.

It was gathered that Modupe is alleged to be in a hush hush relationship with the former CP. Modupe sources revealed, is an old flame of Odumosu, but took a break from the relationship when she began dating Oguntade.

Before hooking up with Oguntade, Modupe was previously married to Dr. Jimi Okunola Aina for whom she bore all her three children: Jimi, Ayodele and Folusho. She was with Oguntade for 17 years as his live-in-lover and took on his name even though the 82 year old never made the relationship formal for all of the years they were together.

Although one of the many reasons she was kicked out was alleged infidelity, IvoryNG cannot independently verify if Modupe found time to sneak under the sheets with Odumosu while still with Oguntade.

But having been sent packing and now a free woman, Modupe allegedly found her way back into the arms of Odumosu, thus causing Folashade severe heart palpitations. Even though she grieves behind closed doors, the troubled woman is alleged to be putting up a stoic face in public while also strategising on ways to allegedly get Modupe’s claws off her husband.

Recall that the 17 year old relationship between  Modupe and Oguntade ended in 2020. She was thrown out of the Lekki home she shared with the retired justice over a myriad of allegations such as back-biting, distrust, stealing, extortion and infidelity.

She was described by her husband as debauched and decadent.  With the end of their relationship also came an abrupt end to her envious friendship with Shade Okoya with whom she attended social events with always dressed in similar attires.

Shade ended the friendship on the instructions of her husband, wealthy industrialist, Chief Razak Okoya who is Oguntade’s best friend and who was shell shocked at the myriad of allegations against Modupe.