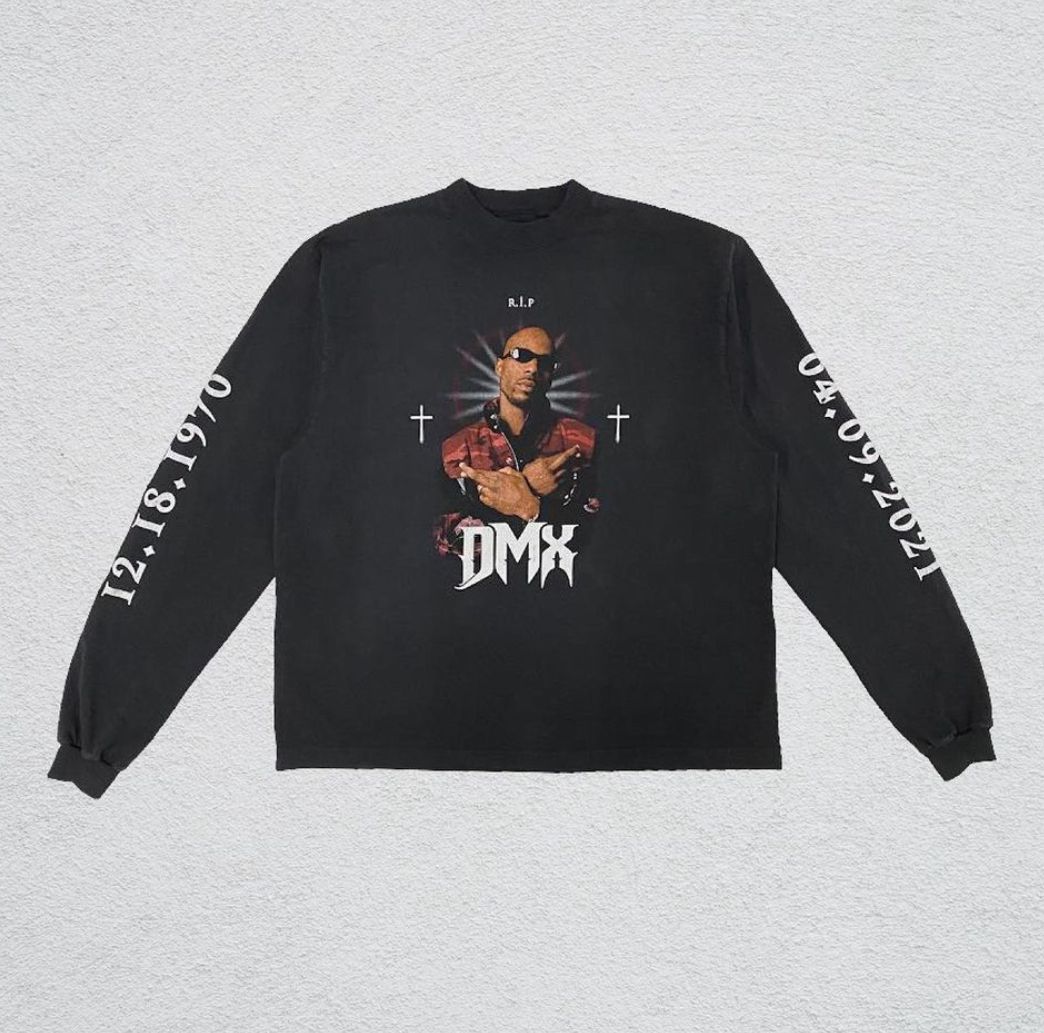 Kanye West is paying tribute to DMX with a T-shirt from Balenciaga.The music-fashion mogul commissioned the luxury line to produce a t-shirt in ho

Kanye West is paying tribute to DMX with a T-shirt from Balenciaga.The music-fashion mogul commissioned the luxury line to produce a t-shirt in honor of DMX’s tragic passing.

Made available on Saturday, April 24, the long-sleeve shirt features a printed image of DMX flanked by two crosses. The acronym R.I.P. is above his head while his birth and death dates are shown on the sleeve. The back features the phrase “In Loving Memory” toward the bottom. The shirt only comes in black and can be purchased for $200 at dmx-tribute.com. The net proceeds will go to DMX’s family, according to the site

One of DMX’s last public performances, was when he showed up and performed at Kanye’s Sunday service, so it’s fitting that Kanye would decide to honor him in a special way, while also doing his part to help his family.

The new release comes the same day as DMX’s public memorial service, which took place in Brooklyn, N.Y. at the Barclays’s Center. That will be followed by a private ceremony on 25, April, at 2:30 p.m. The ceremony will be attended by only DMX’s close friends and family at an undisclosed location. It will also be broadcast live on BET and DMX’s YouTube account. It is unclear if Kanye will attend the event but DMX’s friend and frequent collaborator Swizz Beatz is hoping ‘Ye will be in attendance.

DMX died on April 9 after suffering a heart attack as the result of an alleged drug overdose on April 2 that left him on life support. In the wake of his death, his music streams had increased by 900 percent at one point. He reportedly finished his final album before he passed. The project will feature the likes of Pop Smoke and members of Griselda. It is unclear when the album will be released.

On Wednesday, April 21, a member of the rapper’s team shared official details via Instagram for the upcoming memorial and funeral service. Restricted to close family and friends.

The locations of the memorial and funeral were not disclosed despite initial reports claiming the memorial would be held at the Barclays Center in Brooklyn and the funeral would take place at a church.