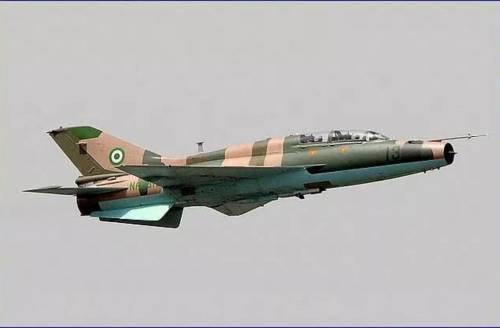 At least 20 soldiers were feared killed in an aerial attack meant to neutralise Boko Haram/Islamic State West African Province (ISWAP) that overran a troops’ base in Mainok on Sunday.

The air strike, according to a soldier, was carried out by the Nigerian Air Force (NAF) fighter jet which mistook the gun truck carrying the troops for terrorists who invaded Mainok in a convoy of four MRAPs, a scorpion Armoured Personnel Carrier and several gun trucks had disguised as friendly forces on Sunday night before dislodging troops of 156 Battalion and setting their camp ablaze.

They were said to have subsequently mounted checkpoints and moved into the community still dressed in Nigerian military desert camouflage.

Narrating how the fighter jet killed own forces, a soldier who made a 14-second video said they were shelled in error.

In the now viral video, the soldier, who spoke pidgin English, said one of the army’s gun trucks coming to Mainok for reinforcement has been shelled by the NAF.

He explained he was calling the gun truck to come and carry him and a colleague standing on the express but the gun truck was going into the bush, alleging the smoke that was captured in the video was that of the bombarded gun truck and the soldiers in it were dead.

“The Boko Haram terrorists disguised in military uniform and gained access to the camp. They came in different groups and could not be counted. The Nigerian Army were pinned down, they requested for reinforcement, the reinforcement got on their way only to get shelled by the Nigerian Air Force.

“The (reinforcement team) was coming from Ngandu when they were killed by the airstrike targeted at Boko Haram. The Boko Haram were dressed in military uniform and carried high calibre military weapons,” a source said.

Earlier, a message was sent out warning soldiers passing through Maiduguri to steer clear because the insurgents, disguised as military personnel, have taken over roadblocks and checkpoints.

“Any of our regular passing through Maiduguri should know that, at Mainok, it’s not soldiers that are at the checking point but Boko Haram because BH dislodged Mainok in the early hours of today (Sunday) and they remain at the camp and at the checking points,” the warning stated.

Lamenting the lack of adequate weapons to tackle insurgency, a soldier said there was no way the terrorists won’t overrun the troops giving the armaments they deployed.

“Do you know what that means? It means we won’t even be able to get them with just our gun truck and if you set mine traps for them, they will walk over it. The worst that can happen is that their tyres will be burst but still they can drive the MRAPs still for at least 2km.

“Just imagine what the casualty will look like. Why are our people treating us this way? I just read a report this afternoon that President Buhari signed billion dollar for procurement of arms but now the money is missing, unaccounted for. Just imagine!

“If they bought the weapons mentioned in that report and distribute them to locations, no Boko Haram will try us. But we continue to lose men out of our people’s greed. Why are they doing us like this? Many people have lost interest in this job because of this kinds of senseless killings. A whole Commanding Officer was killed in today’s attack in Mainok. This week alone, Boko Haram has killed many, dislodged bases and entered towns,” the soldier lamented.

Similarly, terrorists on Friday killed an officer and a soldier attached to 3 Battalion, Abbari/Bulalaiye, Ngala in Borno State.

Same Friday, suspected BHT-ISWAP were said to have invaded an Internally Displaced Persons (IDP) Camp at Aburi in Damboa, Borno State, where they kidnapped five women and nine children.

The terrorists carried out the attack in the night but eventually released a woman with her two kids because they were too young to move.

According to a source, the Aburi IDP Camp was located close to Technical College Damboa, adding the terrorists went away with four women and seven children unhindered.

Reacting to reports on the alleged killings, the Nigerian Air Force through its official Twitter account said it was investigating visuals and reports being circulated.

It said: “The attention of the @NigAirForce has been drawn to reports alleging “How NAF killed over 20 Nigerian Army Personnel by Accident in Air Strike” at Mainok which is about 55km to Maiduguri.

“The NAF wishes to state that visuals and reports being circulated are currently being investigated and the general public will be duly updated on the alleged incident. All inquiries should please be directed to the Office of the Director of Public Relations and Information, Headquarters Nigerian Air Force or forwarded to info@airforce.mil.ng.”

Below are graphic images of the slain soldiers