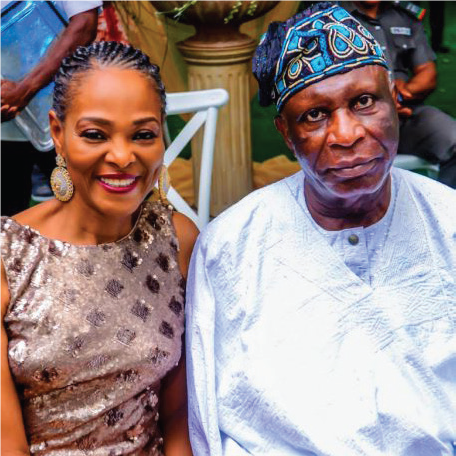 Anyone hoping for a reconciliation between Justice Adesola Oguntade retd, a former High Commissioner to the United Kingdom and his estranged partner,

Anyone hoping for a reconciliation between Justice Adesola Oguntade retd, a former High Commissioner to the United Kingdom and his estranged partner, Modupe Hastrup must quickly shed that thought as the retired Supreme Court Justice, has found love in the arms of another woman simply known as Rosemary.

The woman said to be a little past middle age is reportedly a source of succor to Oguntade who did not enjoy the best of times with Modupe.

Despite putting up a front as a happy couple, Oguntade was not only unhappy and forced to allegedly endure the marriage, his children from his first marriage were vehemently against his being with Modupe, with whom he didn’t formalize his relationship despite being together for 17 years.

From family squabbles to back-biting, distrust and a myriad of allegations bordering on stealing, extortion and infidelity, the relationship finally collapsed in late 2020 like a pack of badly arranged cards.

Modupe was thrown out of the home she shared with Oguntade after an altercation which led to her stuffing her personal belongings and valuables into many suitcases, hurling them into a waiting pick-up van and driving out of the premises.

With the crash of her marriage also came an abrupt end to her friendship with Shade Okoya on the instructions of her husband, Chief Razak Okoya who is best friends with Oguntade and who was shell shocked at the myriad of allegations against Modupe.

Hopefully, Ogunatade’s new love interest will remain the level headed person she is and not eventually go overboard like her predecessor. There are indications that the retired Justice’s children approve of her as their father’s companion.