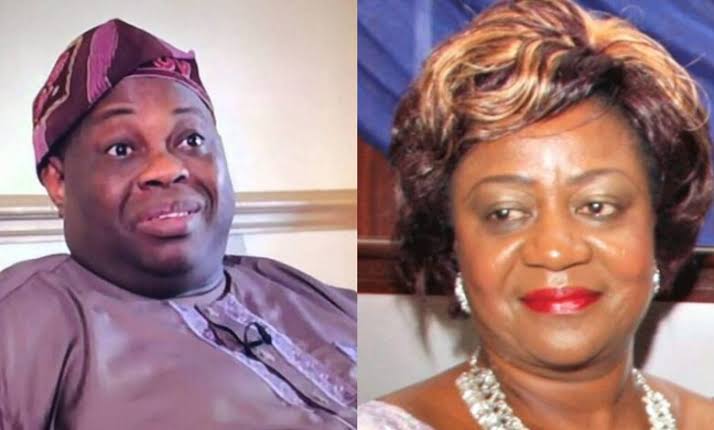 The duo have continued to bicker on social media over a remark by the Chief Executive Officer of Ovation Media Group, about the failures of Buhari’s administration.

While reacting to a tweet attacking him for supporting Buhari in 2015, Dele Momodu had said: “I did not bring Buhari. I did what most reasonable Democrats would have done in the circumstance of PDP’s failure after 16 years in power by trying the next most electable candidate and when he failed tried the next, Atiku, and that is the essence and risk and flaw in Democracy!!.”

Responding to Momodu’s comment, Onochie said: “He (Buhari) “Failed” because he won’t dish out cash for photos that can easily be obtained on Instagram and other picture apps. #BabaNoDeyDrop. Because #BabaNoDeyDrop, your ego-massaging, ostentatious and filthy-wealth-flaunting customers, can no longer afford you. Try Diversification.”

Not one to let that slide, Dele Momodu launched an attack on Onochie.

Responding to Dele Momodu’s attack on her, she called him the KING OF SCAVENGERS! She said, “Hahaha! Look who’s talking…

DELE MOMODU IS SYNONYMOUS WITH SCAVENGING. Dele Momodu has a scavenging history. I don’t. Here is a short history of his scavenging:

“He latched onto late Chief MKO Abiola years ago. Scared of Gen. Abacha, he went into exile. He returned to Nigeria and latched onto Gen. Sani Abacha and began to scavenge from him, didn’t he? Then he latched onto the nouveau riche in Nigeria.

“After them, he latched on to Pres. Buhari. But #BabaNoDeyDrop. He even dried up the taps of the emergency millionaires that Dele latched unto. So to former VP. Atiku he ran. That was not profitable. He didn’t win the presidency so the serial scavenger ran off. From Atiku he ran and latched onto a former Ghanaian President.
Ghanaians brought him down to the ground and used his face to wipe the floor during their last presidential election.

”Now Dele is looking for how to get off the Ghanaian floor and he’s angry with our President again. He thinks I’m the reason his scavenging is not producing results. He thinks i have taken his place. Who wants to buy photos that I have already shared on the Social Media? He’s busy eating his vomit that he cannot reason properly.

”You’re not the only one affected by the downturn of the world economy. I’ll help you. Try diversification, it won’t kill you. Some states are recruiting teachers. Retrain and see if you’ll have a proper job. Or open a restaurant.

“President Buhari is diversifying the Nigerian economy and it’s working. Nigeria recently moved from the 46th to the 25th richest nation in the world, contrary to the expectations of unpatriotic angry birds like you. And You dare call him a failure. You King of scavengers! Keep speaking from your wild imaginations, insulting the President and his Vice, and I’ll keep stuffing your mouth full of bitter facts.”

Dele Momodu, in response to the attack, described Lauretta as a troublesome woman. He said: “Once again, my attention has been drawing to the tweets by a troublesome woman called Lauretta who claims to be working for President Muhammadu Buhari on social media but continues to attract public odium to the exalted office of the Nigerian President. Here’s my simple response.

“Lauretta is obviously peeved that I described her as a scavenger in the corridor of power. I stand by that assessment and assertion. If she has any iota of shame, she would’ve resigned after her nomination was sent to the national assembly, but rejected, as an INEC Commissioner.

“Lauretta was promptly and soundly rejected by a national assembly that is largely controlled by the ruling party APC and the shameless woman has no modicum of self-respect that would have enabled her show she can survive outside power, but NO, Buhari is her last HOPE in life!!!

“Lauretta now calls me a scavenger for doing my job professionally & objectively without any tinge of vindictiveness. Her reasons? I covered the Abachas, Atikus & others because I was hungry. Imagine such chicanery. A supposed media aide who doesn’t know the basic tenets of media!

“Lauretta, what have I done wrong by interviewing and interacting with fellow Nigerians? Apart from being a journalist, I was a Presidential candidate like your boss in 2011 and you should know that leaders interact with fellow leaders while their lackeys are busing breaking heads!

“Lauretta, have you forgotten that Abacha once served under Buhari but Buhari later served under Abacha when the tides changed. Buhari even praised Abacha to high heavens and said he was never corrupt! Pls quote, anywhere I ever praised Abacha! I covered a wedding like other media.

“Lauretta, have you forgotten that Buhari’s military government was toppled by Babangida in 1985 and they became sworn enemies. But this did not stop Buhari from visiting Babangida in Minna several times when he needed his endorsement. Yet a journalist cannot report newsmakers!!
“Lauretta, please be patient as I take you down memory lane since you were trying hard to eke a living abroad while we were busy fighting for the good of Nigeria. Buhari visited Obasanjo for endorsement despite their altercations in the past. Did he do so because he was scavenging!!

“Lauretta, you said I ran to England during the Abacha era but was I scavenging in England like you? By the grace of God, I managed to build a global brand & still found time to join hands with freedom fighters like Soyinka, Akinrinade, Tinubu, Oyegun, Fayemi, Afikuyomi & others! Lauretta, get a life. You are the biggest nuisance drawing negative vibes constantly to your boss. You dey lucky say Buhari no dey sack, you for don scatter since.”