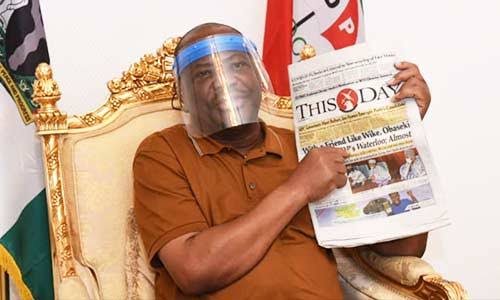 Rivers State Governor, Nyesom Wike has slammed a N7 billion suit against ThisDay Newspapers over an alleged libelous story published against him. The

#EndSars: How we rejected govs, Emefiele’s moves to end protest – Aisha Yesufu
Wike challenges Umahi to debate, alleges he has been working with APC
#EndSars: I prayed for widespread killings in Nigeria – Wike

Rivers State Governor, Nyesom Wike has slammed a N7 billion suit against ThisDay Newspapers over an alleged libelous story published against him. The story was published in ThisDay’s Tuesday, June 23, 2020 edition.

Wike claimed in the story, titled: “With Wike, Obaseki Meets His PDP’s Waterloo, Almost,” that defendants maliciously and falsely portrayed him as an unreliable friend/person.

The suit filed at the Port Harcourt High Court by Wike’s Counsel, Emmanuel C.Ukala, said the Defendants further portrayed Wike as a selfish politician and a person who meddled in and exerts subterranean influence in judicial matters in Courts sitting in Port Harcourt to achieve selfish political interest and that he is not a true democrat.

He is therefore seeking an order of mandatory injunction compelling the Defendants to withdraw, retract and recant the said libellous publication. The retraction is to be published on the front page (and to devote the whole full front page to the publication of the retraction).

ThisDay Newspaper is also to publish an apology in the terms acceptable to the Claimant and with his prior approval at the back page ( on the full back page) in the same edition on which the retraction is published, and two consecutive editions of ThisDay Newspapers.

The Claimant is also seeking an order of injunction restraining the Defendants by themselves or by their servants, agents, privies and associates from further publishing the said libel or any manner however and whatsoever continuing to circulate the said libellous publication concerning the Claimant.