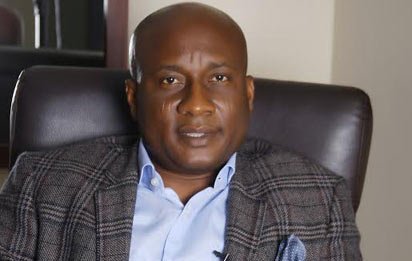 A United States court has rescheduled the trial of Ebony Mayfield, a woman accused of helping the founder of Air Peace, Allen Onyema, to facilitate a

A United States court has rescheduled the trial of Ebony Mayfield, a woman accused of helping the founder of Air Peace, Allen Onyema, to facilitate a $20 million bank fraud.

Court document shows the U.S. District Court of Northern Georgia, Atlanta Division, has rescheduled the case for trial for August 8, 2022.

The document shows the court has jettisoned the earlier trial date of June 27, 2022 date earlier fixed in February by the court.

The judge, Eleanor Ross, issued a notice for the change in the earlier trial date following a request by Ms Mayfield’s legal team, the court document seen by this newspaper shows.

“Having considered the defendant’s Motion to Continue Trial Date and Associated Motions Filing Dates and the reasons set forth therein, the motion is hereby granted. The trial and associated motions filing deadlines are hereby continued. The trial is scheduled to begin Monday, August 8, 2022 at 9:00 am in Courtroom 1708, 75 Ted Turner Drive SW, Atlanta, Georgia 30303,” the judge said in the notice issued on March 19.

Onyema and Air Peace Limited’s Head of Administration and Finance, Ejiroghene Eghagha, also face 36 charges at the U.S. court in connection with the alleged fraudulent scheme. But they have yet to show up or send a lawyer to represent them in court.

Details of the case according to PREMIUM TIMES include how Onyema allegedly recruited Mayfield to act as a manager of his Springfield Aviation Company LLC, which he allegedly used for perpetrating the alleged $20 million fraud between May 2016 and February 2018.

Springfield Aviation, according to court documents was established by Onyema in the U.S. state of Georgia in April 2016 purportedly to specialise in “the wholesaling, trading and sale of commercial aircraft and parts”.

The alleged fraud allegedly began with Onyema and others applying for export letters of credit to cause the transfer of funds purportedly to fund the purchase of aircraft by Air Peace from Springfield Aviation, between May 2016 up till at least February 2018.

In support of the letters of credit, Onyema and others were said to have submitted documents such as purchase agreements, bills of sale, and appraisals proving that Air Peace was purchasing the aircraft from Springfield Aviation Company LLC.

The Head of Administration and Finance, Ejiroghene Eghagha, was said to have sent the documents to Mayfield and directed her to sign them on behalf of Springfield Aviation.

Eghagha, according to court filings, also instructed Mayfield to present the documents to the respective banks in support of each letter of credit.

The support documents, U.S. prosecutors say, were found to be falsified. The aircraft that was referenced in each of the export letters of credit was also never owned or sold by Springfield Aviation, the government added.

The submission of the documents allegedly enabled Onyema to cause banks to transfer more than $20 million into Atlanta-based bank accounts of Springfield Aviation controlled by him. Onyema, after receiving the money in the United States, allegedly laundered over $16 million of the proceeds of the fraud by transferring it to other accounts.

On her part, Mayfield, who was arrested on June 7, 2019 for her alleged roles in the alleged fraud, faces only one charge of bank fraud in a different case at the same court.

The U.S. government filed a charge against her in open court in December 2019. She has since been granted bail.

Prosecutors say she was recruited as a manager of Springfield Aviation with the role of entering into aviation-related contract on behalf of the firm, despite her lack of education, training, or licensing in the review and valuation of aircraft, including aircraft components.

In court filings which Mayfield filed for variation of her bail bond, she indicated to be “a food service professional” also known as waitress.

While the court has fixed August 8 for her trial, no date has been fixed for the trial of Onyema and Eghagha by the U.S. court due to their unavailability.