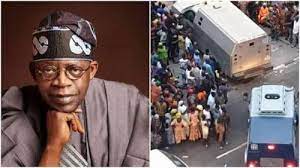 Kehinde Bamigbetan, co-Founder of Grassroots Network for Asiwaju Bola Tinubu, says there is nothing wrong with the presence of bullion vans at the Bou

Allow Tinubu contest in 2023 to avoid wrath of God – Babachir Lawal
Tinubu isn’t my man – El-Rufai admits rift with the APC leader
Giadom: He has been retired from politics – Fani-Kayode mocks Tinubu

Kehinde Bamigbetan, co-Founder of Grassroots Network for Asiwaju Bola Tinubu, says there is nothing wrong with the presence of bullion vans at the Bourdillon’s residence of the All Progressives Congress leader on the eve of the presidential elections in February 2019.

Bamigbetan, a former Commissioner for Information in Lagos State, stated this during an interview with Nigeria Info’ s ‘Daily Digest’ programme.

Speaking on the radio programme aired on Wednesday, Bamigbetan said running an election is not a cheap affair, noting that some circumstances warrant the movement of cash during electioneering.

Viral pictures on the eve of the 2019 presidential election had showed two cash-laden bullion vans driving into Tinubu’s Bourdillon residence in Lagos.

The then acting Chairman of the Economic and Financial Crimes Commission, Ibrahim Magu, had refused to answer a question regarding a petition submitted against Tinubu for alleged money laundering.

Tinubu, now a 2023 presidential hopeful, had stated during an interview that the money belonged to him and he was free to distribute it to his supporters since he was not a government official.

When told by the host of the radio programme, Jimi Disu, that the Bullion vans episode should not have happened in the first instance, Bamigbetan said, “The circumstances will determine. Let us be practical about this matter. You want to run a state-wide election. This is two days or three days to that election; you are going to fund this across Lagos State.

“Running an election is not a cheap affair for a whole state or for a whole country and certainly you either move the fund through electronic system or physically. What I am just saying is that there are some circumstances that create such. It is more often because the emergency of that time required that the funds, the logistics be deployed almost immediately.”