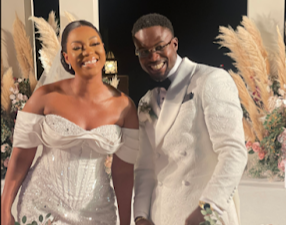 Mariam, one of the daughters of Taiwo Afolabi, businessman and chairman of SIFAX Group and The Lagos Marriott Hotel, has completed her marital rites t

The duo walked down the aisle in faraway United Arab Emirates, Dubai on Tuesday November 8 with only close family and friends in attendance.

The wedding reception held at one of the world’s most luxurious hotels, the prestigious Four Seasons Resort Dubai at Jumeirah Beach. Expectedly, there was an abundance of continental cuisines and drinks.

The white wedding held about two weeks after their traditional wedding took place at her father’s luxury hotel in Ikeja, Lagos.

The final marital rites is also happening barely three months after Afolabi celebrated his 60th birthday in grand style and almost two months after his twin, Kehinde passed on in his sleep.

Mariam is the Group Executive Director, Compliance of SIFAX group. She is also the Chief Executive Officer of Style Loft Box, a fashion, beauty, and lifestyle mall located on the Island. She is also a fashion designer and oversees Mazelle Fashion and Studio, her fashion  brand.

The couple is planning to have their honeymoon in one of Europe’s scenic cities.