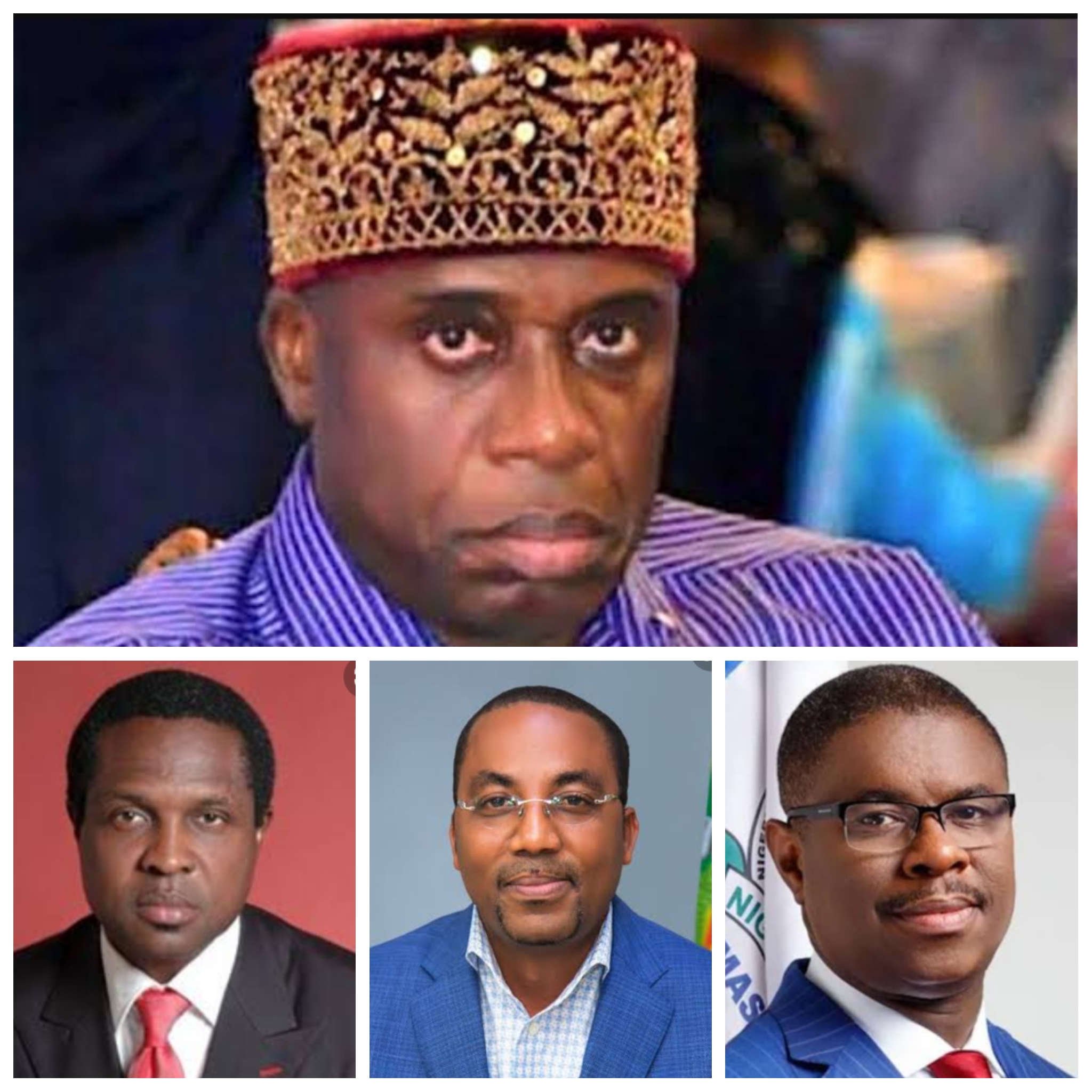 It's been over two weeks since Nyesom Wike, the governor of Rivers State directed the state's Attorney General and Commissioner for Justice, Prof.

It’s been over two weeks since Nyesom Wike, the governor of Rivers State directed the state’s Attorney General and Commissioner for Justice, Prof. Zacchaeus Adangor, to commence diligent prosecution of the illegal financial dealings involving the immediate past governor and erstwhile minister of transport, Rotimi Amaechi, Tonye Cole, Sahara Energy, an oil and gas company floated by Cole and his partner, Tope Sonubi and others, over the sale of  state assets.

Wike gave the directive precisely on Friday  after swearing in three new commissioners.

Wike insists that there was a need for Rivers people and the rest of the world to know what actually happened to the $50 million that disappeared from the state’s account without proof of where it was deployed during Amaechi’s tenure as governor.

The directive to commence prosecution of Amaechi and his boy Cole, follows a court dismissal of appeal by Amaechi.

Amaechi was seeking to stop the probe of the fraud committed during his eight year tenure on the grounds that the probe is targeted at humiliating and witch hunting him due to his and Wike’s political differences.

Unfortunately for him, the Supreme Court in Abuja dismissed the appeal on the grounds that the issue of not being given a fair hearing does not arise as no one is on trial.

In a judgement prepared by Justice Emmanuel Augie, the apex court dismissed the case and ordered him to pay the sum of N1 million to Wike.

Wike had earlier said that what becomes of the probe was up to the leaders.

Apparently, the leaders of the state gave him the go ahead which is the reason the prosecution is going forward.

Amaechi who was a presidential hopeful of the ruling All Progressives Congress, APC party had entered the race, confident that his perceived popularity and perhaps, his traditional chieftaincy title conferred on him by a local monarch in Katsina State and his being in the good books of President Muhammadu Buhari was more than enough to get him the coveted prize.

He must have calculated his winning the primary to mean an automatic dismissal of any witch hunt, as he described Wike’s probe and a life time of immunity.

Alas, he was dead wrong.

Not only was in second place, he was defeated by a huge margin.

His defeat no doubt spurred Wike to intensify the prosecution, having been stripped of all powers and protection.

Left with regrets for entering the race, he has retreated to lick his wounds and is slowly getting out of the shock of his loss. He is obviously picking up what is left of his political life and has began to plot ways of getting back into the scheme of things with his congratulatory message to the flag bearer of the party, Bola Ahmed Tinubu and his resolve to support him in whatever way he can, to emerge Nigeria’s next president.

But beyond his personal defeat, how does it in anyway affect some of his ‘boys’ who he has placed in strategic positions?

This The Street Journal has set out to examine.

Tonye Cole: With Tonye, Amaechi’s defeat will no doubt badly affect him. First, he may face a difficult hurdle before, during and perhaps after the general election. There are presently two factions of the APC party in the state, a situation Amaechi could not resolve while still in power. While one faction is championed by Senator Magnus Abe who is the gubernatorial flagbearer of that faction, the other faction loyal to Amaechi produced Tonye Cole as the gubernatorial flagbearer.

Just like what happened in 2019 where the party was barred from participating in the 2019 general election due to internal wrangling, the situation may likely repeat itself in 2023. And with Amaechi out of power, Tonye’s ambition may likely be dead on arrival.

Then there is the issue of him laundering $50 million for Amaechi while he was the governor and the prosecution of him and his principal by Wike. Even if the Independent National Electoral Commission, INEC end up recognizing him as the legal gubernatorial aspirant for the party in the state, he may be a hard sell to the people of Rivers who now see him as one who stole their collective wealth. On the other hand, if Wike succeeds in prosecuting him before the general elections, then his ambition is as good as dead on arrival.

Mohammed Bello-Koko: His job as the Managing Director of Nigeria Ports Authority was made possible by Amaechi who he considers his benefactor and godfather. He took over from Hadiza Bala-Usman while she was on suspension as the MD for committing several infractions. Her suspension was on the recommendation of Amaechi who was her supervising minister. Some of these infractions included but not limited to undermining Amaechi’s authority, particularly over the manner she was re-appointed for a second term of five years, without recourse to due process; failing to remit N165 billion operating surpluses to the federation account etc.

A panel set up by Amaechi found her culpable after its investigation. She was issued a query which she responded to, denying all allegations and insisting that she was innocent of all that she was being accused of. Unfortunately, her response did very little to prevent her replacement. Amaechi didn’t waste time appointing one his ‘boys’ in her place.

Amaechi and Bello-Kolo’s paths crossed over 10 years ago when he was a senior staff of Zenith Bank. He was the accounts officer for all of Rivers State government’s bank accounts domiciled in the bank when Amaechi was governor.

In hindsight, Amaechi may have allegedly laid the ground work for Bello-Kolo to assume his position as MD, years before it happened, as shortly after Buhari assumed power and Amaechi made minister of transport, Bello-Koko left the private sector and took up an appointment on the board of NPA. He was appointed Executive Director for Finance and Administration in 2016 and later acting MD earlier this year.

But with Amaechi getting trounced at the primary, Bello-Koko may just be marking time in NPA as he is now exposed and without the protection of his godfather particularly as it concerns how he acquired some of his prized possession as a public servant, if and when a probe panel is set up to look into him.

Bello-Koko is alleged to have hidden behind two firms tucked away in the British Virgin Islands, notorious secrecy and tax haven, to invest in the London property market. According to revelations from Pandora papers, he reportedly used two BVI-incorporated shell companies; Marney Limited and Couldwood Limited, to secretly acquire a total of five London properties, including one in 2017 after his public service appointment. As a public servant, he continued to serve as a director of the two companies in breach of the country’s code of conduct law.

Unfortunately, with his godfather out of the equation and being left unprotected, it remains to be seen just how he intends to fend off the hawks when they come circling, because they will come.

Dakuku Peterside: The former member of the House of Representatives was Amaechi’s Commissioner of Works from October 2007 to January 2011. When his boss became minister of transport, he was appointed the Director General of Nigerian Maritime Administration and Safety Agency, NIMASA. Unfortunately before the expiration of his first term of four years, Buhari replaced him with a northerner.

He has remained without a political appointment since then and has been hoping against hope that should Amaechi emerge the APC presidential flag bearer and eventually the president of Nigeria, his bread would become very buttered for a very long time.

Unfortunately, his permutations didn’t work out as he expected and so he remains on the side lines where he has been since 2020.