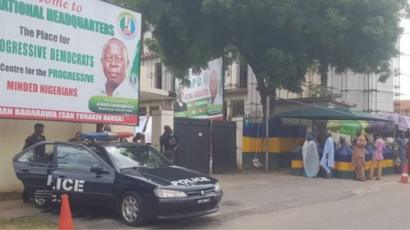 Police explain why they took over APC national secretariat

The police say they deployed officers in the national secretariat of the All Progressives Congress (APC) to ensure that there is no breakdown of law and order.

Officers, who said they were acting on the “orders from above”, stormed the party headquarters on Tuesday afternoon and asked staff and journalists who were already in the building to go out. A few journalists were later allowed in under the condition that they would not conduct any interview inside the party secretariat.

But in a statement, Frank Mba, force public relations officer, said the police officers were not at the secretariat to seal off the place.
“The deployment is a proactive move by the Force to maintain peace and ensure there is no breakdown of law and order at the secretariat. Members of the APC as well staff of the Secretariat are therefore at liberty to conduct their legitimate businesses, in and around the national secretariat as always,” Mba said.

While Giadom nullified the disqualification of Godwin Obaseki, governor of Edo, from the party’s governorship primary, the “Ajimobi NWC” reversed it.

President Muhammadu Buhari has held meetings with some governors and Senate President Ahmad Lawan as part of measures to resolve the crisis.