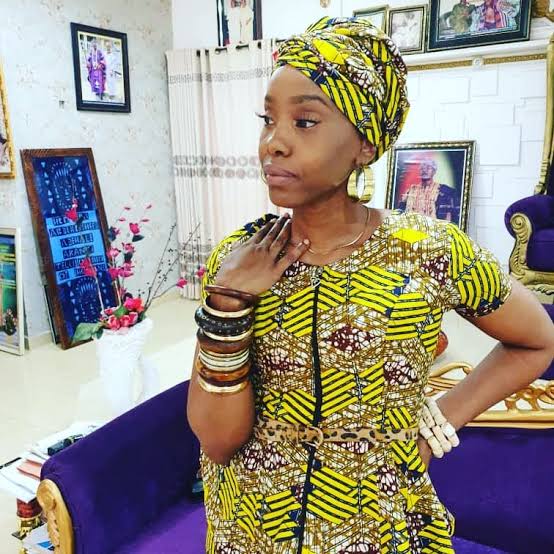 Oluwo of Iwo’s ex wife, Chanel Chin drags him by his crown for mocking her (Photos)

She shared over 20 posts allegedly mocking the monarch who she shares a son with named Oduduwa.

Earlier, the Oluwo had taken to social media to mock a certain “enemy” who has a child for him.

He added that the enemy recorded his activities while they were together and attempted to extort him by threatening to release the videos.

The Oluwo of Iwo, compared her to Toronto sisters, Jyoti and Kiran Matharoo, who both attempted to extort businessman, Femi Otedola in exchange for keeping their affair with him quiet.

It is believed he was making reference to the 2020 interview the Jamaican-born Olori granted, accusing him of numerous vices, including sleeping with their 13-year-old maid and daughter of a petty trader who plies her trade in front of his palace.

At the time, she also released a video of the monarch rolling up a joint to smoke.

In the post, he said, “My Enemies have lost and I rejoice over them !!! Victorious Faces of a king that overcome all his enemies including the one that sleeps in my bed, have a child, poisoned, took contract money for my life, recorded every movement in the bedroom and palace for 4 years of a fraudulently arranged relationship, asking for settlement money not to release video but never got a dime like the Chief Femi’s Toronto Indian girls in 2017 who were obviously her known associates,” he wrote.

“But one secret they don’t know about me is the Power and will of Olodumare God Almighty who is worthy of praise and will never leave His ordained Servant to be scorned by enemies !! Kings,even fake mighty kings, people of different status and frenemies gathered against me but in the name and of Olodumare.

“He helped me destroy them all and I’m always and born ready any day, anytime, hours, minutes and seconds of their schemes and with same name and power of God Almighty Olodumare… they will still be destroyed. How has life of shame been treating you losers ???? Hahahaha,” he concluded.

After the Oluwo mocked her on social media, Chanel Chin took to her Instagram Stories to retaliate with a series of mock posts.

She called him a “55-year-old man-boy” and shared a post about a deadbeat father.

She also shared an edited photo of a cockroach getting into a car and said it’s a “rare picture of the Emir of Yoruba land entering his vehicle to drive himself mad.” 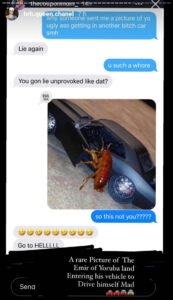 She went on to share a photo of his former wife as she accused him of lying that he didn’t have a wife before her. 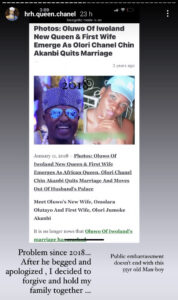 She also shared a photo of a woman alleged to be the ‘Oluwo’s bride-to-be.’

In another post, she shared a photo of a shop with just a sachet of Milo and milk and she sarcastically captioned it, “Him opening up a supermarket for me and Oduduwa (her son with the Oluwo) with the money we got from the Emir of Yoruba land.” 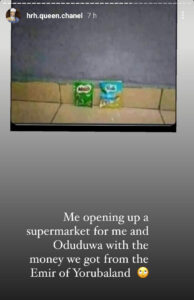 She also shared a post that reads: “Dear mothers, let’s teach out daughters that loyalty does not mean accepting unlimited pain & physical abuse from broken men/boys.” 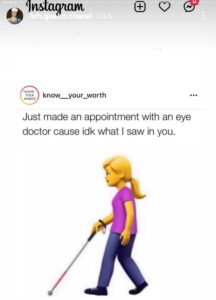 The Oluwo and Chanel went their seperate ways in 2019 following allegations of domestic violence, inabilty to take responsibility for his family among several issues.