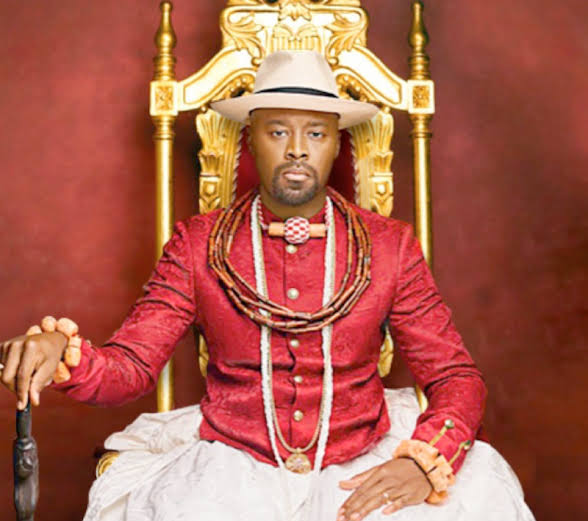 Olu of Warri kingdom, Prince Utieyinoritsola Emiko allegedly in the eye of the storm over palace intrigues

This is as a result of the intrigues that characterized the selection process of the monarch and his eventual installation which took place on Saturday August 21, 2021.

According to Trumpet Newspaper, the reverred monarch has allegedly been invited by the Economic and Finance Crime Commission to answer questions pertaining to alleged fraud.

“This is the first time in the history of Warri Kingdom that a sitting Olu of Warri, is being invited by an anti-graft agency to come and answer questions involving fraud,” a reliable source who pleaded anonymity said.

The Ogiame Atuwatse III was allegedly asked to report to the anti graft agency to explain what he knows about a purported diversion of huge sums of money from the bank accounts of late Captain Idahosa Wells Okunbor, who died on August 8, 2021, in a London hospital, and who happens to be his father in-law.

According to the source, the monarch has allegedly honoured the invitation on two occasions. thus creating apprehension among the inner circle of the monarchs kitchen cabinet.

The source alleged that part of the missing money may have been what the monarch used to finance his coronation.

“The formerly estranged widow and second wife of the late billionaire businessman, Nosa, was the person who discovered that one of her late husband’s bank accounts had allegedly been tampered with and large sums of money fraudulently withdrawn from the bank account, thus causing her lawyer to write a petition to the EFCC who began immediate investigation,” the source alleged.

He stressed that the Olu of Warri Palace is presently doing everything within its powers, to make sure that this information is not made public.

“The allegation is false, wicked and reckless. As a Chief in the Olu of Warri Palace, I do not have the authority to comment on issues like this, which have no direct bearing with His Royal Majesty, Ogiame Atuwatse III and the Warri Kingdom,” Chief Mene Brown, a High Chief in the Warri palace, who is a close confidant of the Olu of Warri, Ogiame Atuwatse III countered the allegation.

“As far as I know, it is a business colleague of the late business Mogul, Dr. Olatunde Ayeni, whom the late Captain Okunbor bought out of a particular business concern, they both had an interest in before his death, is the person that is alleged to be making trouble writing all manner of petitions to the EFCC after the death of his supposed friend, even though, the late Captain Okunbor left some other businesses he had interest in for Dr Ayeni to continue to manage on his own.

“I am however aware that EFCC has waded into Dr Ayeni’s petitions and found nothing to substantiate. In all this, HRM Ogiame Atuwase III and the Warri Palace have nothing to do with all these allegations,” High Chief Brown added.

Contrary to Brown’s assertions, the source maintains that some palace chiefs are desperately trying to cover up the ugly happenings in Warri Palace.

According to the source, the monarch is jittery and has now renewed his efforts for reconciliation, thus contacting all the persons he thought he had earlier conquered to retain the throne.

This is all the more reason he is doing everything possible to reach out to his estranged Uncle, Prince Bernard Emiko and his cousin, Prince Oyowoli, the eldest son of the 20th Olu of Warri, Ogiame Ikonwoli I, who was cheated out of the throne.

Both Princes he stressed are still maintaining their distances from the monarch and the Palace.

Also, Chief Ayiri Emami, who was disrobed as the Ologbotsere of Warri Kingdom is now being pressured at the instance of the monarch by his very close friends to withdraw his cases in courts against the Olu of Warri as he is not too sure about the outcome of the court cases, adding that if the matter is allowed to go through all the gamut of the court processes, Ogiame Atuwatse III might lose his throne.

Our source said the Ogiame’s worry is based principally on the fact that he knows that the 1979 Chieftaincy Edicts of the defunct Bendel State, which expressly stipulates the procedure and processes to be followed before an Olu of Warri can be enthroned was out rightly violated, during his selection and eventual installation as the 21st Olu of Warri kingdom.

And now that the pomp and pageantry that follows the Olu of Warri coronation is over, reality has now begun to set in that the court decisions no matter how long it takes, may not favour him. Hence Ogiame Atuwatse III is presently making an effort to reach out to all the aggrieved persons in this matter.

The source, further stressed, that on the 22nd of May, 2022, Chief Ayiri Emami, the allegedly suspended Ologbotsere of Warri Kingdom close friends, for the very first time since after the coronation of Prince Tsola Emiko as the 21st Olu of Warri, in a deliberate effort to broker peace between the two of them, arranged a meeting in Lagos in the late Captain Okunbor expensive house in Banana Island, where Chief Emami and Ogiame Atuwatse III met for the very first time in months.

Before the arrival of the monarch at the meeting venue, Chief Emami told whosoever cared to listen, that he will not accord Prince Tsola Emiko the respect of a seating Olu of Warri. True to his promise, Chief Emami never did. Even though Ogiame Atuwatse III was very polite and civil to him during the brief period they met and spoke.

And when, it became clear to all people present at the peace meeting, that Chief Emami was not ready to go back on his words, the peace meeting was abruptly called off and rescheduled for another day.

In the first peace meeting, Prince Yemi Emiko, who is alleged to have skewed everything in favour of Prince Tsola Emiko to become the 21st Olu of Warri, was not present.

In the rescheduled peace meeting that took place on the 23rd of May, 2022, Prince Yemi Emiko was present, when the close associates of Chief Emami were trying to pressure him into withdrawing his cases in courts concerning the Olu of Warri.

People at that meeting were shocked and speechless when Prince Yemi Emiko, who is now aggrieved, told Chief Emami never to attempt to withdraw any of his cases in courts. Saying “Your cases and Prince Oyowoli are the only options left for us, to checkmate the present Olu of Warri, Ogiame Atuwatse III, who is apparently getting out of control since he ascended the throne.”

“The roofs in the Palace are presently leaking, especially now that the rains have come. The Warri Palace, unlike when Ogiame Ikonwoli was still alive and resident in the palace, was very well kept, as all the facilities in the palace were well maintained then.

“The present Olu of Warri has this personal forbear for the Olu of Warri Palace built by the Itsekiri people, because he and his mother, Iya Oba Gladys and him, still harbour this erroneous belief whether true or false, that it was when his father moved into the Warri Palace that he strangely came down with the illness that eventually resulted in his demise.”

The source concluded that the drama in the Olu of Warri palace has intensified on all fronts, as highly respected Chief and member of the Ginuwa I Ruling House, Akoma Dudu-Dimeyin, who at the inception of the crisis that led to the installation of the present Olu of Warri, said the Ginuwa I Ruling House has no such powers to purportedly suspend Chief Ayiri Emami as the Ologbotsere of Warri Kingdom.

He was immediately coaxed into appearing before Ogiame Atuwatse III for the revalidation of his Chieftaincy title some time back. As if that was not enough humiliation, he is again presented with some documents to sign which he refused. Chief Akoma’s refusal to sign any document has not only unsettled some members of the Olu of Warri palace but has also heightened the tension and anxiety among the Ogiame Atuwatse III inner kitchen cabinet members and some Chiefs, who are members of the Olu of Warri Council of Chiefs.