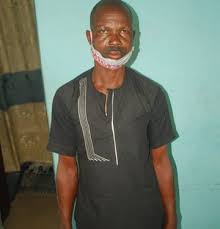 A 50-year-old father of six, Peter Ayemoba, who was arrested for having carnal knowledge of his two daughters in Niger State, says he started the illi

A 50-year-old father of six, Peter Ayemoba, who was arrested for having carnal knowledge of his two daughters in Niger State, says he started the illicit affair with them after the demise of his wife who is their mother and that they also gave their consent for him to have sex with them.

Peter was arrested after his daughters aged 22 and 20, reported him to a family member who invited the police. When interrogated, Peter told the police that he had been sleeping with his daughters since his first wife who is their mother died about seven years ago.

“The death of my wife devastated me to the point that I did not know what I was doing. I suspect that somebody placed a curse on me, because what I have done in the past seven years is not ordinary, frankly speaking.

“What I did after my wife’s death was to bond with my children and they became closer to me until gradually I started sleeping with the girls. Honestly, I cannot explain why I should do that to my own daughters. But there was a spirit that kept telling me that I would not be the first man to sleep with his daughter and at such, I should not worry too much about it.” he said.