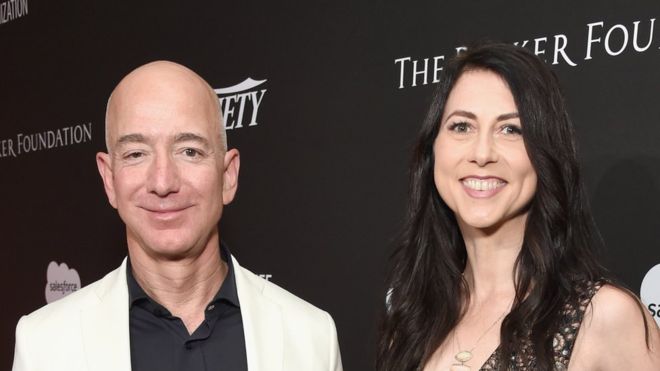 MacKenzie Bezos in league with Gates, Warren, donates half her fortune to charity

Following their much publicized divorce, MacKenzie Bezos, the ex-wife of Amazon boss Jeff Bezos, has joined the league of billionaires such as investo

Following their much publicized divorce, MacKenzie Bezos, the ex-wife of Amazon boss Jeff Bezos, has joined the league of billionaires such as investor Warren Buffett and Microsoft founder Bill Gates who are into philanthrophy and have called for the richest to give away half or more of their wealth. MacKenzie who is estimated to be now worth $37bn promised to give half her fortune to charity.

MacKenzie and Jeff divorced earlier this year. She would later acquire 4% of the company in the settlement.
“In addition to whatever assets life has nurtured in me, I have a disproportionate amount of money to share. My approach to philanthropy will continue to be thoughtful. It will take time and effort and care,” she said in a statement. “.”

The Giving Pledge has so far been signed by 204 individuals, couples and families from 23 countries.  Former New York Mayor, Michael Bloomberg, CNN founder Ted Turner and entertainment executive Barry Diller were among the initial signatories in 2010.

Facebook’s Mark Zuckerberg and his wife Priscilla Chan joined the list in 2015, saying they will give away 99% of their shares in the company to good causes. He said they were donating their fortune to the Chan Zuckerberg Initiative to make the world a better place for their daughter Max to grow up in. The shares, worth more than £60bn, will not be donated to the initiative immediately, but over the course of the couple’s lives.

Jeff Bezos is not one of the signatories to the Giving Pledge. Last year, he put $2bn into a charitable fund he established to help the homeless and set up a new network of schools. The move attracted a backlash from some quarters as Jeff has been accused of underpaying his staff. He is estimated by Bloomberg to be worth $114bn.

The pledge is a public promise rather than a legal contract, according to its website, which says: “The goal is to talk about giving in an open way and create an atmosphere that can draw more people into philanthropy.”