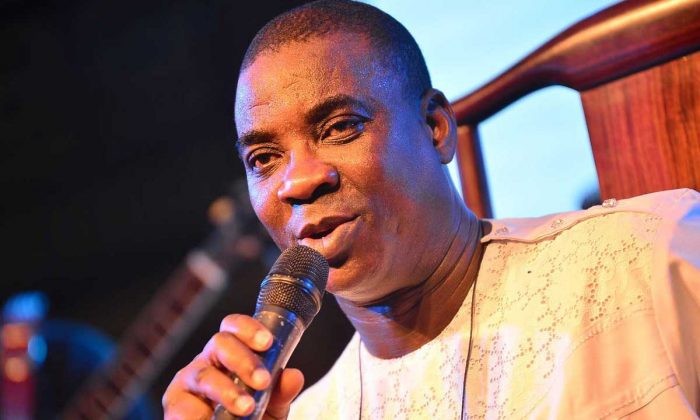 Fuji singer, King Wasiu Ayinde Marshal (KWAM 1) has described as preposterous, news of his alleged affair with Queen Badirat Olaitan Adeyemi, one of the wives of the Alaafin of Oyo, Oba Lamidi Adeyemi.

For the past two days, the rumours of his alleged affair with the Queen has been trending on social media platforms.

Both the Alaafin and his queen who is at the center of the story have since debunked the rumour.

In a statement he issued via his media adviser, Kunle Rasheed, Kwam 1 who recently got the title of The Maiyegun of Yorubaland not only denied having any affair, calling it a lie from the pit of hell, he also threatened a lawsuit against the online media outfit that published the supposed affair whose sole aim is to drag his name and that of the revered Alaafin’s palace in the mud.

According to him, while he would ordinarily not give credence to such news, he is compelled to address this particular one as it seems the rumour was made up by someone whose warped mind may have been numbed by COVID-19. Besides, allowing the allegation to continue without addressing may be translated to be the truth as in this part of the world, a lie repeatedly told, has a way of transmuting to truth.

KWAM 1 alludes to the fact that many have had difficulty coming to terms with the fact that he was conferred with the title of Mayegun of Yoruba land and would do anything to see him go down including the Alaafin as well who’s only crime is conferring on him the prestigious title.

In conclusion, while reminding his detractors of his knowledge of the customs and tradition of the Yourbaland, going by his title, it behoves on him to uphold those traditions and culture which he has upheld and guarded with utmost decency. He therefore assured his fans and the general public of his willingness to seek legal redress for character assassination and to bring the rumour mongers to book.