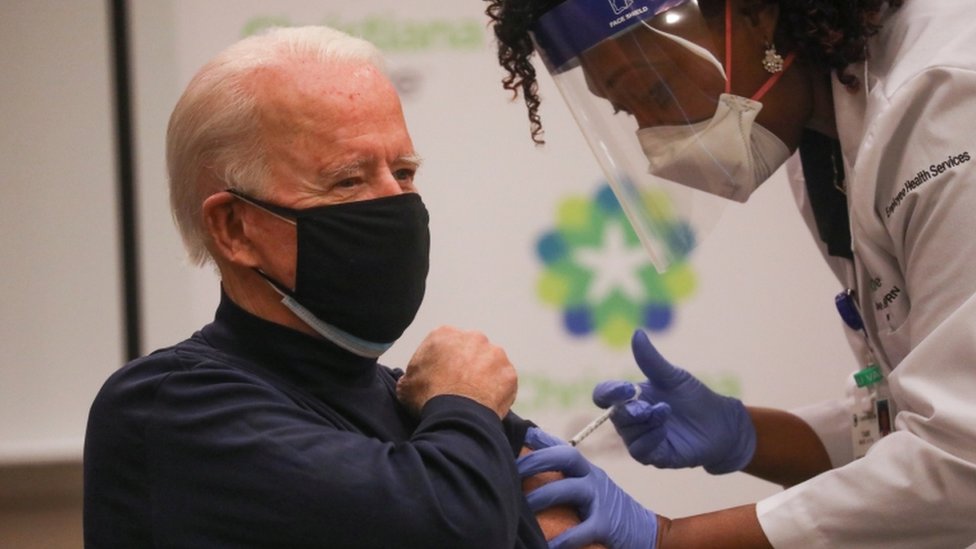 US President-elect, Joe Biden received a Covid-19 vaccine on live television on Monday in a campaign to boost Americans’ confidence in the jabs. Th

US President-elect, Joe Biden received a Covid-19 vaccine on live television on Monday in a campaign to boost Americans’ confidence in the jabs.

The 78-year-old incoming president got the Pfizer vaccine at the Christiana Hospital in Newark, Delaware. His wife Jill received the shot earlier, the presidential transition team said.

Joe Biden told Americans there’s nothing to worry about when they get vaccinated and that in the meantime they should keep wearing masks and listen to the experts, AFP is reporting.

They were the latest high-profile political figures publicly joining the first wave of vaccinations aimed at stopping a pandemic that has killed almost 318,000 Americans.

Vice President Mike Pence and his wife got vaccinations last week but President Donald Trump has yet to take part in the drive.

The Republican leader — who has become consumed by pushing conspiracy theories that his election loss to Biden was the result of mass fraud — cites the natural immunity he is believed to already have after recovering from a bout of coronavirus.

However, he has done little, even in terms of issuing statements, to support the campaign to overcome Americans’ vaccine skepticism. His wife, Melania Trump, has also been largely absent from the issue.

For Joe Biden, who will be the oldest president ever to take office on January 20, this was the first shot in the two-stage Pfizer vaccine. He said he was “looking forward” to the follow-up.

Biden praised “the scientists and the people who put this together — frontline workers, people who were the ones who actually did the clinical work.”

Biden also had some rare praise for the Trump administration, which he said “deserves some credit” for overseeing record-speedy development and production of vaccines.

But Joe Biden, who spoke through a double mask, cautioned that there was still a long way to go before the inoculations can really halt the virus’ spread.

“It’s worth stating that, you know, this is just the beginning. It’s going to take time. In the meantime, I hope people listen to all the experts… talking about the need to wear masks during the holidays,” he said.

“If you don’t have to travel, don’t travel. It’s really important.”