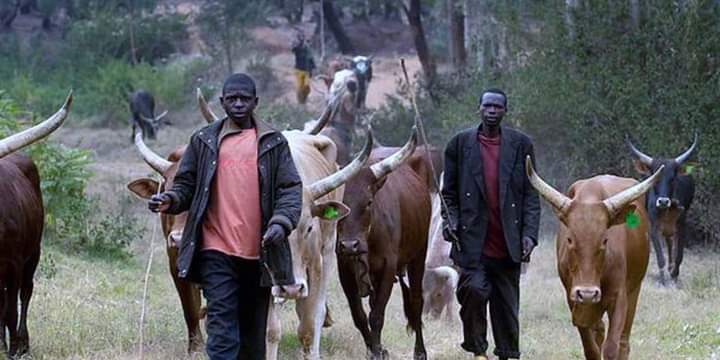 The Indigenous People of Biafra (IPOB) has announced the date of ban on Fulani bred cows in the South East as well as the outright ban on the recitation of the Nigeria National anthem in schools in the zone.

This was contained in the address delivered by the Head of Directorate of (HOD) of IPOB, Chika Edoziem on Monday to its people worldwide.

According to Edoziem, the ban on the Fulani cows in Igbo land takes effect from April,22, emphasising that only Igbo bred cows would be allowed in ceremonies henceforth.

IPOB has directed all traditional institutions, the clerics and other relevant stakeholders in Igbo land to ensure the message gets to the appropriate quarters. While the ban on the recitation of the Nigeria National anthem he said takes effect from Monday night.

“Beginning from tonight, no more Nigerian National Anthems in all Schools in Biafraland. Our Children must no longer be reminded daily that they are under oppression by singing the national anthem of the oppressor. School authorities and proprietors have a responsibility to teach our children our national anthem. The Biafran National Anthem.

The ban placed on Fulani cows will take effect in April 2022. Effective this month Fulani cows will not be used for any social or ceremonial events and festivals in Biafraland. Our native cows will be used instead for these events Traditional Custodians of our Culture, the Clergy and Town Unions must ensure that this message gets to the grassroots. We cannot continue to eat and bring cause and damnation upon our land and upon ourselves by consuming cows that were used for bestiality.

Also, the group in its renewed measures to secure the release of its leader, Nnamdi Kanu has ordered a worldwide campaign and protest tagged ” The prisoner of conscience campaign “. To achieve this aim, IPOB has also directed that “all IPOB family members, Biafrans and friends of Biafra are hereby urged to change their profile pictures on social media with our official campaign poster.

Secondly all IPOB families worldwide are hereby directed to activate the earlier instruction passed down to them. We shall embark on a worldwide protest in cities and capitals around the world. The focus of our protest shall be British Embassies, the British Parliament, 10 downing street, the Kenyan Embassies, the Zoo Nigerian Embassies and International Organizations like the UN, the EU, Amnesty International and Media houses.” Edoziem stated.

To consolidate the group, Edoziem has also announced that the Directorate of State(DOS) of IPOB would be creating another department called “the education department” to enlighten people of the South East on the cultures and traditions of Ndigbo.

He also informed that every 30th of May would be remembered as Independence Day in the South East.

“The May 30th of 2022 shall take a different format. It shall be celebrated as our Independence Day. Seminars, Symposia and Lectures in designated halls will be organised. No protests. Preparations for this must commence without delay.

Recalling events of 2021, which Edoziem admitted was challenging but ” milestone ” for IPOB, he alleged that the group spent millions of dollars to secure the freedom of those arrested by security operatives.

In the same vein, Edoziem has announced the withdrawal of its Eastern Security Network(ESN) even as it noted that it is no longer recruiting.

“Please Biafrans take note, recruitment of ENS operatives is closed so do not fall into the hand of DSS in the name of recruitment for ESN. All ESN commandos and reservists should return to base within 72hrs.” Edoziem ordered.