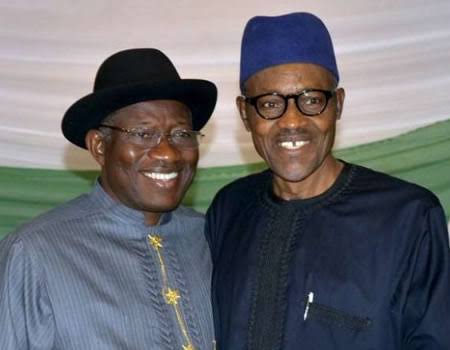 There are strong indications that president Mugammadu Buhari is backing former president Goodluck Jonathan to return to aso rock as president. Buha

There are strong indications that president Mugammadu Buhari is backing former president Goodluck Jonathan to return to aso rock as president.

Buhari has reportedly shunned his Vice,  Yemi Osinbajo and the former Lagos State Governor, Bola Tinubu, to endorse his predecessor Jonathan, to be his successor in 2023.

According to The Whistler, Buhari is poised to reciprocate the gesture Jonathan made to him in 2015 following that historic phone call, sounding out not only his name but the title, ‘Mr President’ to concede defeat that still reverberates across the world.

Buhari notes with pride, Jonathan’s exemplary display of political leaning and has used him widely to represent Nigeria as special envoy in global issues, especially in peace making.

Following what has been described as a successful meeting with Buhari, the Jonathan camp has moved swiftly to convene a meeting where the former president met with South-South leaders coordinating his alleged return to the Presidency in 2023.

The meeting was held on December 27, 2021, at Aridolf Hotels and Spars in Yenagoa, Bayelsa State.

A source at the former president’s camp revealed that the meeting on Thursday was at the instance of Buhari. The source added that the meeting was premised on plots by some All Progressives Congress governors to allow Jonathan return to power so that the southern region could only stay one term in office.

They held consultative meetings with stakeholders and have lined up broad meetings that will deepen their activities.

“The coordinators of the group plotting for Jonathan to return to Aso Rock in 2023 met recently with Jonathan at his wife’s Aridolf Hotels and Spars,” the unnamed source said.

He added that, “The chairman of the group, Chief Dikivie Ikiogha, and other South-South coordinators were present at the meeting. Jonathan indicated an interest in their campaign and asked them to return to their different states to continue with their campaign.

The plot has been kept active by two governors from the North-West, who are plotting for a strong APC Northern governor to become Jonathan’s running mate.

“There is also a plan to reconcile Jonathan with a South-South minister.”

Before now, Tinubu has been tipped as the likely candidate to emerge as the APC presidential candidate. He had stated in late 2021 that he will make known his intention to vie for the position in January 2022.

Already his posters have been widely pasted while bags of rice and beans have been distributed in no small quantities.

He has not dissociated himself from his associates and groups who have opened up campaign offices nationwide while also receiving endorsements from many groups even as he began consultation last year.

Osinbajo on the other hand is being pushed by young hawks, most of whom are serving in various capacities in the Buhari government, to get the APC presidential ticket.

The Vice President has also received some powerful endorsements even as his associates and supporters have opened up campaign offices across the country. He is yet to declare his interest.

The Jonathan group, it has been revealed, will proceed to hold a national meeting of ministers who served under him before enlarging the group to involve former governors and others prequel to his declaration.

The sticking point however remains on which platform he will contest the election as sources say he is not disposed to defect to the APC due to bad reception that might receive following downbeat about the party’s chances in 2023.

The two governors, it was gathered, suggested to the president for Jonathan to defect but it’s not clear if the former president will heed the call.

Already, the APC Caretaker Committee is being accused of a ploy to scupper the National Convention due to alleged ulterior motives to ensure a Jonathan ticket is realised.

The committee had announced late last year that it will hold its National Convention in February 2022 to craft substantive national executives for the party towards the election.

But with the development that some committee members prefer a Jonathan ticket and have worked on the president to see to that realisation, early resolution of the convention crisis may not be in sight.