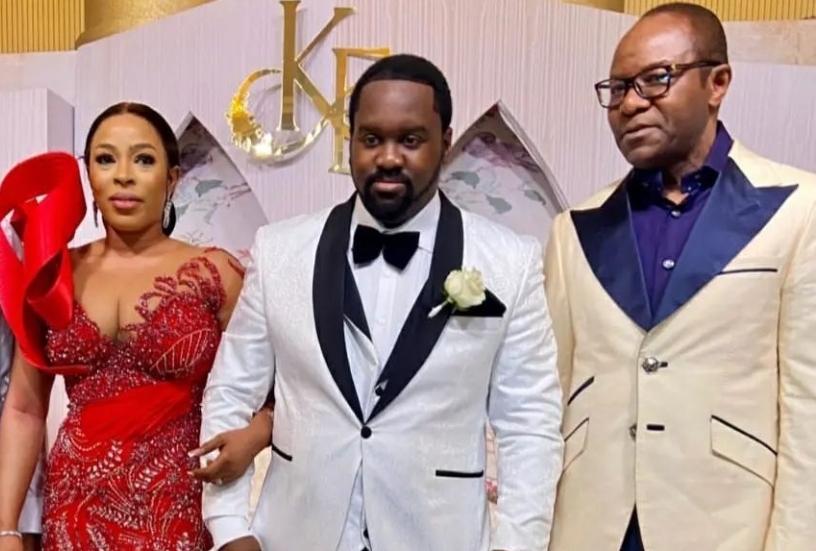 Having being away from the social scene after an expose on him and his alleged lavish spending at a hotel for two days, running into millions of naira

Having being away from the social scene after an expose on him and his alleged lavish spending at a hotel for two days, running into millions of naira, man of means and influence, Ibe Kachikwu, came out of hibernation on Saturday June 11, 2022 to host friends, associates to the second wedding in his family.

The classy wedding which had in attendance the who is who in the political, business and social circle was held at the Oriental Hotel and Suites.

It was the white wedding of his first son Emeka which happened almost a decade after he hosted the creme de la creme of society to a lavish wedding ceremony of his first daughter. Emeka who was joined in holy matrimony to his partner, Kelechi Esimogu is his first son from his first wife, Elizabeth.

His wife, Kelechi, a graduate of Nursing from Madonna University is a minister of the gospel and pastors Port Harcourt based seven year old vhurch, House of Grace Ministry aka Solution Centre.

A philanthropist who empowers women and children via her Get Women in Mission for Peace and Humanity, Kelechi is also a budding gospel artiste.

The two lovers reportedly met while Kelechi was on her usual preaching assignment.

Besides family members who had all their hands on deck to ensure that it was a successful wedding, his second wife, Mariam, played her part well, supporting her older co-wife as the mother of the groom.

The traditional wedding ceremony had earlier taken place last month at the Landmark Center, at Oniru area of Lagos. The guest list was quite impressive and it read like the who is who in the business, social and corporate world.

A titled chief of Onicha-Ugbo, Kachikwu’s name is synonymous with all things oil and energy in Nigeria.

He was at some point the President of the Organization of the Petroleum Exporting Countries (OPEC), and then became the Group Managing Director of the Nigerian National Petroleum Corporation (NNPC). He was also a former Executive Vice Chairman of ExxonMobil.