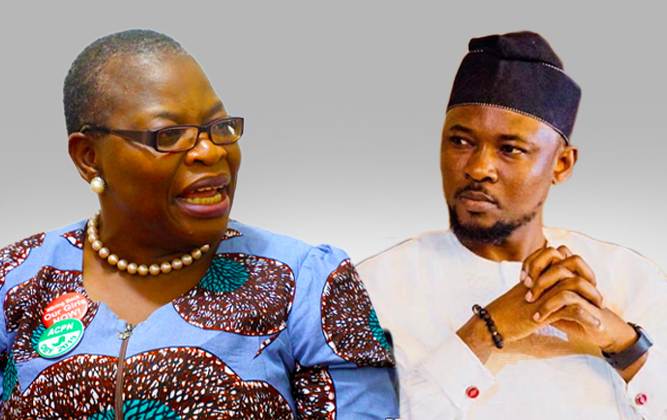 Former minister of education, Obiageli Ezekwesili has written to Usman Baba, inspector-general of police, requesting the prosecution of Japheth Omojuw

Ortom accuses Buhari of nepotism, says he is only for Fulanis
WHO warns against Madagascar’s COVID-19 herbal remedy
#EndSARS: Over 100,000 sign petition asking ICC to prosecute IGP

Ezekwesili had dissociated herself from Alpha Reach, a company owned by Omojuwa, following the controversy over a social media campaign done for Alex Saab, an alleged money launderer.

Omojuwa and some social media influencers were alleged to have been paid to tweet in support of Saab, Venezuelan envoy, accused of fraud. But Omojuwa denied any involvement in the campaign. He also said he got “full consent” from Ezekwesili before making her a director in his company, Alpha Reach Limited.

The petition dated April 14, 2021, and signed by Marshal Abubakar of Falana and Falana chambers, is titled: “Petition Against Mr Japheth Omojuwa for Forgery, Fraudulent Misrepresentation and Fraudulent Use of the Name, Identity and Particulars of Mrs. Obiageli Ezekwesili as a Director of Alpha Reach Limited RC No: 1066507”.

In the petition, the minister said she was not consulted before being made a director in Alpha Reach. Ezekwesili attached as evidence to the petition, communication between herself and Omojuwa wherein he “informed her that the Alpha Reach Company Limited is his company and that she is not involved in it at all”.

“Japheth Omojuwa never sought for her consent and /or participation in incorporating any company whatsoever and for any purpose whatsoever,” the petition read.

“The said Japheth Omojuwa neither sought for nor obtained requisite incorporation documents and information the CAC would require in processing the registration i.e the particulars of directors, share numbers, signature of directors, means of identification of directors and address etc.

“Our client reiterates for emphasis that she never filled or signed the statutory consent of first directors of Alpha Reach Company Limited in 2012 and or at anytime whatsoever.

“The foregoing infractions amount to forgery, fraudulent misrepresentation, and egregious breach of extant provisions of the Penal Code Law, the Administration of Criminal Justice Act, 2015 and the Companies and Allied Matters Act, deserving of investigation and prosecution.”

“Whilst pledging our cooperation towards the just resolution of the instant matter, our faith in the capacity of the Nigeria Police force under your stellar leadership to cause an immediate, diligent and thorough investigation into this crime, aimed at getting to the root of this case and bringing the suspect to justice is resolute and unshaken.”

How Alpha Reach came to light
A foreign media platform, BuzzFeed, had reported that employees of the PR company got paid to promote a social media campaign for the release of a Columbian, Alex Saab, who was detained in Cape Verde over pending charges against him in the U.S. In a statement on April 9, 2021, Omojuwa said the report by BuzzFeed was false, stating that “Alpha Reach, as an organisation, was not involved in the campaign making the rounds.”

Ezekwesili’s son wades in
The former Minister’s son, Chuba Ezekwesili, in a series of tweets on his Twitter account with the handle @ChubaEze, late Wednesday, dared Omojuwa to show evidence of where his mother gave her consent to be a director in Omojuwa’s PR company, Alpha Reach, as being claimed by him.

In his tweets, Chuba said, “It’s fascinating watching you @Omojuwa do your best to avoid taking responsibility. You’ve still not shown any document that indicates she signed or gave you any consent. You took @obyezeks name & tried to use it for your gain & lied when it came out.

“You can try to obfuscate with all these shalaye you’ve done @omojuwa, but you’re yet to do this simple task – show evidence that she gave you consent and that she was aware you made her a director in your company. It’s that simple – show us all your evidence.

“There have been many like you @omojuwa over the years who have thought they could use mom’s kindness and love for Nigeria to profit. You all think you got away with it, but we can assure you that this isn’t how the story ends.

“I’m grateful for the actions you’ve taken so far because it will be to our benefit. You will be an example to others that no one ever bullies the Ezekwesili family. No one. Hi @omojuwa. You can block me, but you can’t block @officialEFCC.”