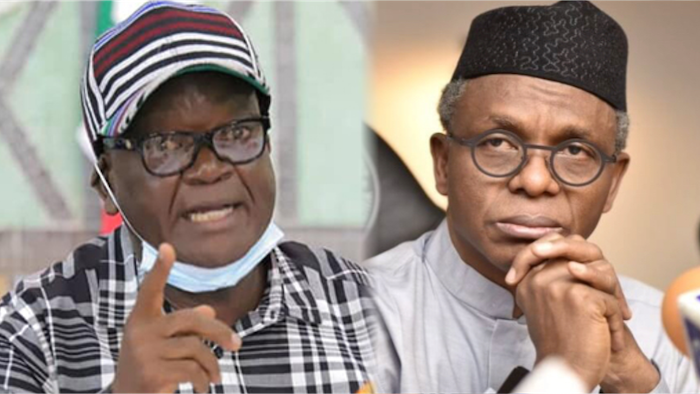 The Benue governor has fired back at his Kaduna State counterpart in a scathing statement on Saturday. El-Rufai had berated Ortom’s call to t

The Benue governor has fired back at his Kaduna State counterpart in a scathing statement on Saturday.

El-Rufai had berated Ortom’s call to the federal government on matters of insecurity.

A fortnight ago, Mr Ortom, on video, called on the federal government and President Muhammadu Buhari to rise up to their responsibilities.

The governor was reacting to the bloodshed at one of the Internally Displaced Persons (IDPs) camps in the state, saying over 70 lives had been lost to violent killings in Makurdi local government in two weeks.

Commenting on the clip, El-Rufai said: “I did not hear what Governor Ortom said (in the video) but I know him and he is not somebody I take very seriously, frankly. He has other issues of governance that he is using the Federal Government as a punching bag to distract attention from his failures.”

Reacting to El -Rufai’s utterances,  Ortom, through his spokesperson, Terver Akase, said El-Rufai who “has failed in several aspects as Governor of Kaduna has no moral justification to accuse another Governor.”

He went on to accuse his Kaduna counterpart of religious and ethnic bigotry, calling him unprintable names.

“A governor who has divided the good people of Kaduna against one another by not hiding his hatred of indigenes of the state on account of religion and ethnicity is not qualified to judge another governor on any issue whatsoever. A Governor who chose a Muslim deputy in a state where Christians have a huge population is certainly not one to preach unity and peaceful co-existence.”

“El-Rufai’s attack on Governor Ortom is merely to make him look good before the Presidency. He has apparently fallen out of favour at the Villa and wants to use Governor Ortom as a launch pad back to reckoning. How has he handled his own problems in Kaduna?

This is a man who has insulted almost every prominent Nigerian including the late President Umaru Musa Yar’Adua and former President Olusegun Obasanjo; a man who is his former boss and one who brought him to limelight. ”

“We have not forgotten the unprintable things El-Rufai said during Goodluck Jonathan’s time as President. He insulted the then President and publicly supported terrorists attacking parts of the country. His statements on the abduction of Chibok girls and several other acts of terrorism are still fresh in our minds. El-Rufai is on record to have said repeatedly that Fulani people must retaliate any wrong done to them no matter how long it takes.”

Although Ortom did not dispute the fact that he is owing workers, he said the former FCT minister has no moral rights to counsel him on salary payment.

“Nasir el-Rufai doesn’t possess the credentials to counsel anyone on payment of salaries and the welfare of workers. This is a Governor who recently sacked 4,000 workers for no just cause. He ought to be ashamed of himself. What happened to the lofty promises he made to Kaduna people in 2015?”

He then advised the Kaduna State governor to focus on addressing the “numerous problems” in his state.

Kaduna, like many other states in the country is faced with a security crisis bordering on incessant kidnappings and banditry.