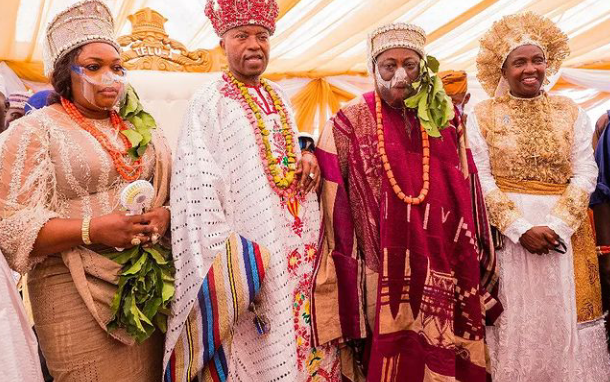 Over the weekend, the ancient town of Iwo, Osun State literally stood still as media entrepreneur, Dele Momodu and his wife, Mobolaji, played host to

Over the weekend, the ancient town of Iwo, Osun State literally stood still as media entrepreneur, Dele Momodu and his wife, Mobolaji, played host to dignitaries from all walks of life to witness his and wife’s installation as The Aare and Yeye Aare of Iwo Kingdom.

In an earlier letter citing reasons for giving the Momodus chieftaincy titles, the Oluwo said the Momodus were given the titles for their immense contribution to the promotion of Yoruba culture and tradition, as well as their mental beneficence through national and international media in ensuring that quality governance is delivered to Nigerians.

He said when installed, the Momodus would complement the Iwoland throne in promoting her visions and mission statements. And their quality piece of advice, connections and goal-setting spirit would further catapult Iwoland to enviable heights.

Held on the palace grounds, the historic event which was filled with culture and colour began when Momodu who is the chairman of Ovation group and his wife, arrived the venue in grand style.

The highlight of the event was when the new Chiefs were showered with royal prayers by HRM Oba Abdulrasheed Akanbi, Oluwo of Iwo Kingdom, Telu 1. The newly installed chiefs were decorated with traditional leaves, installed and presented with all the paraphernalia attached to the respected title.

Later, there was a superb reception at Dr. Niyi Oriolowo’s Royal Palace Resort where a team of experts had been assembled to host guests of the newly installed chiefs.

In the course of the reception, the Oluwo of Iwo, Prince Damola Aderemi, Dr Reuben Abati, Prince Bisi Olatilo and others all spoke glowingly about Aare Momodu and why he merits the title.

The media entrepreneur has numerous other titles attached to his name. He is the Onigege Ara of Jogaland, Ogun State; the Ogwanusi of Imeri Kingdom, Ondo State; the Kiazolu of Grand Cape Mount County, Liberia; and the Basorun of Ike-lla Orangun, Osun-State