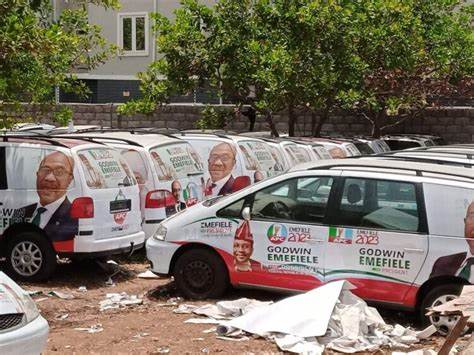 The Central Bank of Nigeria governor Godwin Emefiele, has reportedly taken delivery of his campaign vehicles ahead of the 2023 general elections. Sev

The Central Bank of Nigeria governor Godwin Emefiele, has reportedly taken delivery of his campaign vehicles ahead of the 2023 general elections.

Several cars branded with Emefiele’s pictures, adorning traditional outfits of the three major ethnic groups in Nigeria have been circulated on social media.

On March 26, campaign posters publicising the CBN governor as presidential aspirant of the All Progressives Congress flooded Eagle Square, during the party’s national convention in Abuja.

Although Emefiele is yet to announce that he will be contesting for the party’s ticket, just as he is yet to authorise deployment of the campaign vehicles.

“The governor said the vehicles should not be deployed yet because nothing has been cast in stone as far as his running or otherwise is concerned,” said the source under anonymity.

Emefiele is reported to have the support of members of the Igbo ethnic group who believe his tenure as the nation’s central bank governor qualifies him to be Nigeria’s next president.

The Peoples Democratic Party has repeatedly called for Emefiele’s resignation, affirming that his partisan affiliation and entanglement with the APC violated section 9 of the Central Bank of Nigeria (Establishment) Act which provides that “the governor and the deputy governors shall devote the whole of their time to the service of the bank and while holding office, shall not engage in any full or part-time employment or vocation, whether remunerated or not…”