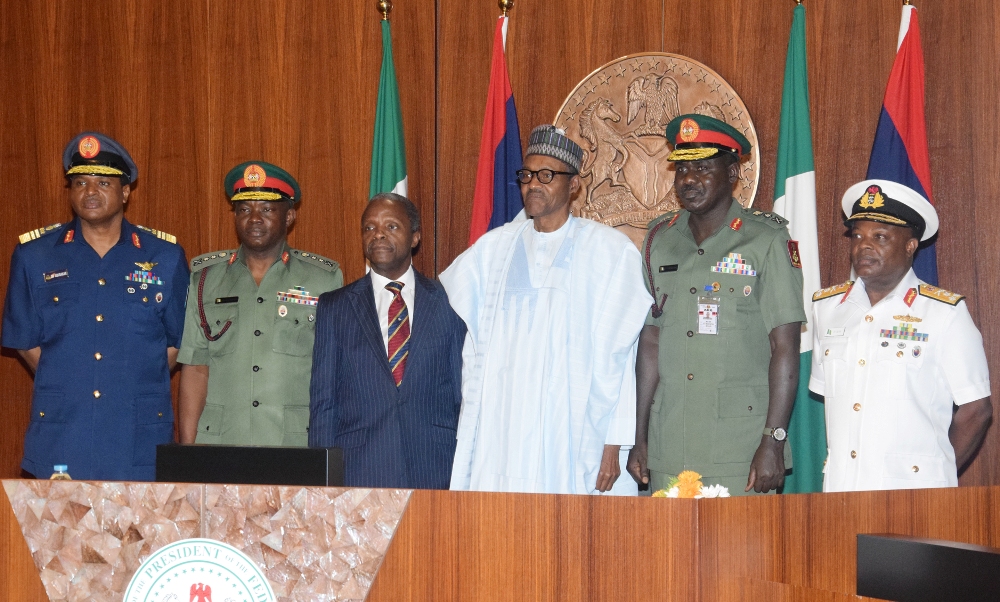 The Presidency has warned against planned protests targeted at the service chiefs on Monday (tomorrow), blaming a section of the political class for m

The Presidency has warned against planned protests targeted at the service chiefs on Monday (tomorrow), blaming a section of the political class for misleading the public, saying it was aware that up to 2,000 people had been hired to demonstrate against the service chiefs.

“A group of politicians and beneficiaries of the Boko Haram insurgency is right now paying for people to join their planned protest against our country’s service chiefs, and they will no doubt seek the media’s collaboration on this as usual. This imminent gathering is the latest in a series of demonstrations orchestrated by the opposition to embarrass the government of President Muhammadu Buhari.

“As part of this overall scheme, the Peoples Democratic Party, with its belligerent politics, has been marching from one embassy to the other in protest against the Buhari administration and the nation’s highest court of justice, the Supreme Court. They are keen to give the impression that Nigerians are in support of them as they take to the streets, and they will go to any length to promote this false narrative”, the Presidency said in a statement on Saturday by Buhari’s media aide, Garba Shehu.

The Presidency further urged the media to “remain unbiased and discerning in their reporting”, accusing them of “becoming unwitting tools in the hands of the opposition.”

The presidency also cited the booing of Buhari by Maiduguri residents on Wednesday, last week, as part of the wider plan to continue to embarrass the President. The Presidency disagreed with the view of some analysts that the booing signified a rejection of the Buhari regime.
“It is misleading, as some analysts have tried to do, to read this as verdict against President Buhari, who emerged winner with 94 per cent of the votes cast in the Presidential election in the state in February last year.

In its reaction, main opposition party, the Peoples Democratic Party asked the Presidency to face what it called its self-inflicted ordeal and address the consensus concern of Nigerians over its poor handling of security issues instead of seeking to blame the opposition and the media. The party’s National Publicity Secretary of the party, Kola Ologbondiyan, described threats and allegations by the Presidency, that the opposition was sponsoring a protest against the heads of military institutions, as derisory, self-indicting and diversionary.

It said the action of the Presidency further showed the confusion that it claimed “pervades the Buhari Presidency in the face of discontentment by Nigerians, adding that the Presidency was planning to blackmail the media and the opposition.
“It is clear to all, including even the Buhari Presidency, that Nigerians across board, have been in protest against the Buhari-led APC administration and need nobody to mobilize them to publicly exercise their constitutionally guaranteed rights any day to register their discontentment against a failed administration that has continued to live on propaganda, excuses and denials.

“Moreover, the PDP restates that its demand that the security high command should be rejigged to inject new blood to effectively tackle our security challenges; a position that have become a consensus opinion of all other patriotic individuals and groups, including the two chambers of the National Assembly, is well known within and outside our country.

“Accusing the opposition and threatening the media are therefore diversionary and apparently aimed to validate alleged plots by agents of governments to clamp down on innocent Nigerians, the media and members of the civil society to suppress and foist a siege mentality on Nigerians. Our party holds that instead of resorting to fabrications, blackmail and threats, a responsive and concerned administration should rather listen to the people, stop its blackmail, propaganda, denials and excuses; take urgent steps to rejig its security architecture and end the escalated bloodletting under its watch.”

There have been strident calls lately on Buhari to replace the service chiefs, amid worsening security challenges in the country. Insurgency, banditry and kidnapping have lately worsened across the country, recording huge casualties almost on a daily basis.