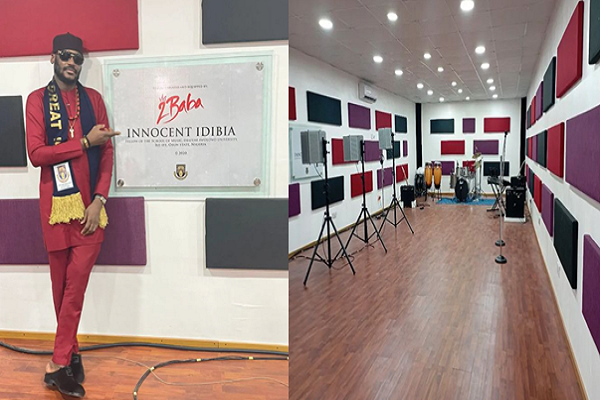 Singer, songwriter, record producer and entrepreneur, Innocent Idibia otherwise known as 2Baba, has commissioned a music studio he built for the Music

Singer, songwriter, record producer and entrepreneur, Innocent Idibia otherwise known as 2Baba, has commissioned a music studio he built for the Music Department of the Obafemi Awolowo University, Ile-Ife.

He announced that the University of Benue is the next port of call for a music studio.

The ultra modern recording studio was well received by the university’s board and students who happily sang their school anthem with him in their midst.

With this development, the university can be said to have the best recording studio in Nigeria, according to the Vice Chancellor, Prof. Ogunbodede.

“As far as the Nigerian university system is concerned. So we can proudly say that today, we have the best recording studio in the country of any university. And that is because of your magnanimity and philanthropic gesture,” he said.

This feat is coming three years after the same school conferred on him, the award of a Fellow of the school of music by the university’s Department of Music,