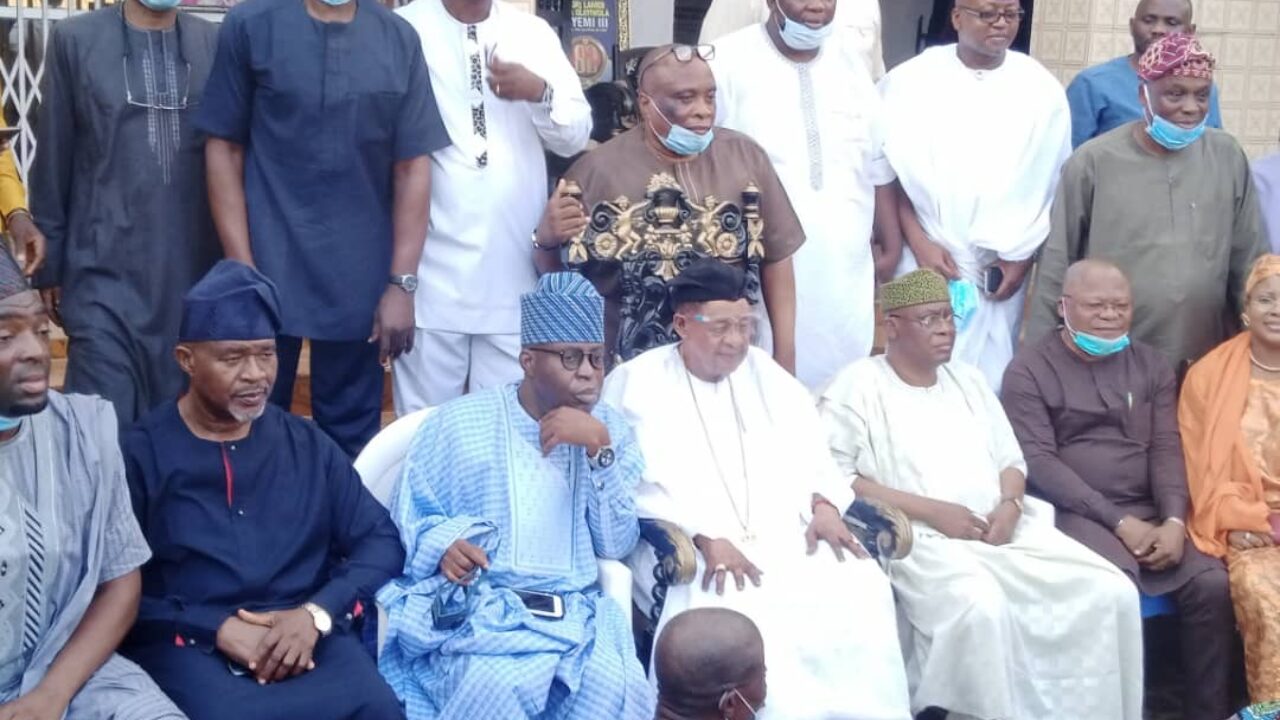 Politicians loyal to Bola Tinubu, a national leader of the All Progressives Congress (APC), visited Lamidi Adeyemi, the Alaafin of Oyo at his palace

Politicians loyal to Bola Tinubu, a national leader of the All Progressives Congress (APC), visited Lamidi Adeyemi, the Alaafin of Oyo at his palace, on Monday.

Led by Dayo Adeyeye, a former minister of state for works, the group said they were at the palace to seek support for the 2023 presidential ambition of Tinubu.

Soji Akanni, a former senator from Oyo state; Rotimi Makinde, a former member of the house of representatives; Oyetunde Ojo, an in-law of Bola Tinubu, were in the delegation that also visited the palace of Saliu Adetunji, the Olubadan of Ibadan.

While addressing the monarchs at their palaces, Adeyeye said Tinubu has the capacity to succeed President Muhammadu Buhari. He said since the rotational policy of the APC favours the south, Yorubas should support Tinubu.

Adeyeye said Tinubu was not aware of the group’s effort, stating that the coalition was formed to represent the Yoruba agenda.
“Our mission is political. Politics has started and everyone is scrambling. We, the Yoruba people, see it as our turn because it is the agreement that presidency would be rotational,” he said.

“We have both written and unwritten contracts. After President Muhammadu Buhari’s eight years, it is the turn of the Yoruba. In the south, we have south-east, south-south and south-west. We have a joker in the south-west and the joker is Asiwaju Bola Tinubu, who was part of the struggle for democracy. There are fundamentals of governance and we want someone who is versed in politics to go into the race. We see that Asiwaju Tinubu has the clout and he is qualified. As experienced politicians, we see that Tinubu is qualified.”

While responding, Alaafin said he believed in the group’s mission while lamenting that Nigeria political landscape is insincere.
“In Yoruba land, covenant is very important. We believe that with law of retributive justice, if you break covenant the repercussion is great. You may think the race for 2023 is too early but it is never too early to start,” he said.

“Last week, Boko Haram slaughtered many people like goats. We cannot continue like that. If you want to have a country that is forward moving, there must be federal system of government. There is no sincerity in the politics of Nigeria. Things have not changed in this country; there is insincerity. We need to have a president who can listen.

“We have not been fortunate to have the kind of president that we deserve. We are the first to build skyscraper, cocoa industry, we had always been ahead. Money was used for the purpose for which it was meant, so we were prepared and developing. If education during the time of Chief Obafemi Awolwo was on concurrent list, there would not have been free education in the South-West. I believe in your mission.”