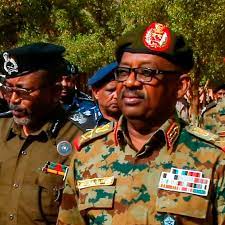 Sudan authorities foiled an attempted coup d’etat, according to reports from state media, warding off opposition to a civilian-military council th

Sudan authorities foiled an attempted coup d’etat, according to reports from state media, warding off opposition to a civilian-military council that has run the country since the last coup in 2019.

A leading army general and a Cabinet minister blamed the coup on loyalists of former Sudanese ruler, Omar Al Bashir, who was ousted in 2019 after 29 years of ruling the North African country.

According to reports from Reuters, state media interrupted the normal broadcast schedule to air patriotic songs as hundreds of troops backed by tanks were deployed in the streets of the capital city, Khartoum.

Troops and tanks briefly closed the White Nile bridge linking Khartoum and Omdurman, where the headquarters of the army’s armoured corps is located.

A top government source told Agence France-Presse (AFP) the plotters had attempted to take over the state media building but “they failed.” Measures had been taken to contain it, before the coup could have gotten out of hand.

The source further said that the perpetrators were a group of officers who had immediately been suspended and interrogation by law enforcement would follow.

The incident came after months of rumours about a planned coup, Reuters reported.

In a Facebook post, Sovereignty Council member Mohamed Al Faki Suleiman called on the Sudanese people to confront the coup attempt and “rise up to defend the country and protect the democratic transition.”

Pro-democracy activists behind the protests have repeatedly complained that not enough was being done to purge his loyalists of the military, police and security agencies. Many of the military’s top brass and mid-ranking officers are known to be among Al Bashir’s loyalists.

The civilian-led government of Prime Minister Abdalla Hamdok made the blunder of not having the upper hand in restructuring the military and security services after Al Bashir’s ousting, Samir Makeen, the deputy head of the National Commission of Human Rights, told The National.