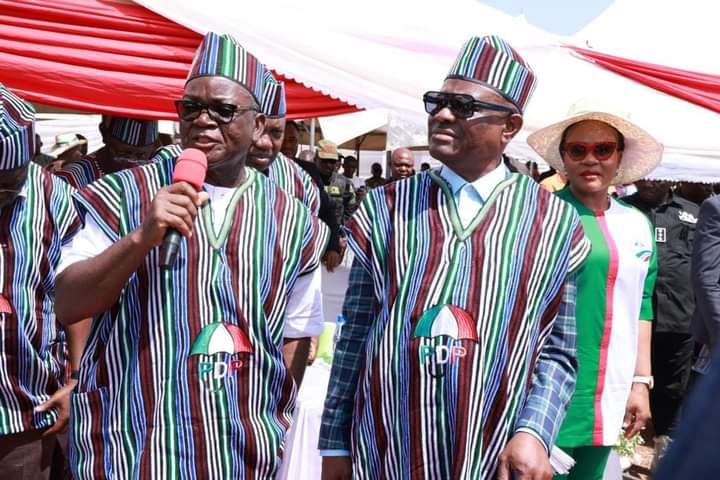 The governor of Benue state, Samuel Ortom, has named a road in the state after his counterpart in Rivers state, Nyesom Wike. The 2.1km township roa

The governor of Benue state, Samuel Ortom, has named a road in the state after his counterpart in Rivers state, Nyesom Wike.

The 2.1km township road named after Wike was among the projects inaugurated on Monday, November 7, after the flag-off ceremony of the 2023 campaign in the state.

The Benue state governor, who will complete his tenure as governor next year, had won the Peoples Democratic Party (PDP) ticket to contest the Benue north-west senatorial district election in the 2023 general election.

Wike, alongside Governor Seyi Makinde of Oyo state, Governor Okezie Ikpeazu of Abia state, and Governor Ifeanyi Ugwuanyi of Enugu state, were present at the campaign flag-off in the state.

The road also leads to the residence of Iyorchia Ayu, national chairman of the Peoples Democratic Party (PDP).

Recall that since the emergence of former vice-president, Abubakar Atiku, as the Peoples Democratic Party (PDP) presidential candidate, there have been intensified moves by some aggrieved members of the party, especially from the camp of the Rivers state governor, Nyesom Wike, for Ayu’s replacement by a candidate from the South.

They had boycotted the party’s presidential campaign following Ayu’s refusal to quit his position.

They argued that the party’s presidential flagbearer for the 2023 presidential poll, and the national chairman, cannot come from the same geo-political zone.

Wike’s camp also noted that they want Ayu to be replaced by a candidate from the south for the purpose of equity and balance.