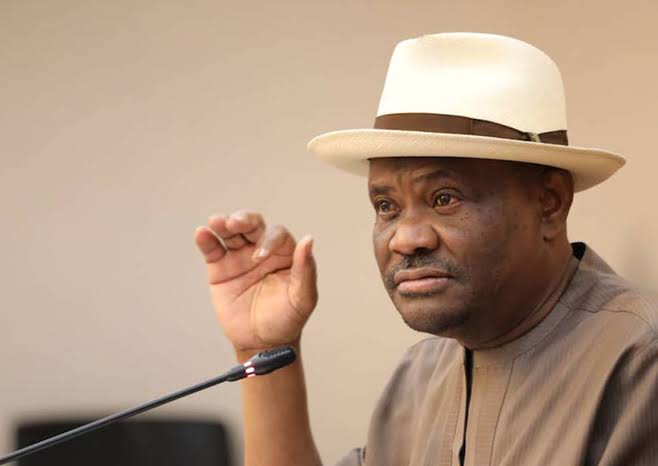 Nyesom Wike, the governor of Rivers state has accused Peoples Democratic Party (PDP) National Chairman, Sen Iyorcha Ayu, of ingratitude to Governor Samuel Ortom of Benue state for boasting that he could have stopped Ortom from contesting for office and could stop contestants from participating in the coming elections as no one could sack him.

Wike, responding to Ayu said nobody was talking about sacking Ayu, adding that without Ortom, Ayu couldn’t have returned as party chairman, daring him to stop anyone from contesting the election, just as he scolded media expert and spokesman for the Peoples Democratic Party Campaign Council, Dele Momodu, as jobless for allegedly warning he (Wike) and allies not to cross the line over the party crisis.

The governor said, “I heard when he said he could have stopped Ortom from running for election. You see how ungrateful human beings can be?

“This was the same Governor Ortom who pleaded with us to say I can take the risk of letting Ayu become national chairman, without being greedy.

“The agreement by PDP governors was that no national chairman should come from where a governor comes from. We agreed on that, but Ortom came. And as a man we respect, he said I want to promote my people in national politics. We said okay, on your honour we let him (Ayu) be.

“This is a man who never campaigned anywhere, never printed a poster to be national chairman. Even money they gave him to print posters, he never printed any. And he (Ayu) is the one saying if he wanted to stop who brought him, a man who stood as a guarantor for him, he could have done so. That is the corruption we are talking about.

“Why is he (Ayu) not resigning? He is hoping Nigerians would donate money into the party so he would again superintend over that money. He has already finished over N11 billion party primaries money. Account for it, he says the public should go into the account. We say show us the money. Print the account of PDP, and let the world see how you expended the money.

“This is the party all of us have laboured to take over power from ruling All Progressives Congress that has done badly. Then the national chairman would open his mouth to talk about stopping contestants.

“Ayu shouldn’t dare. He knows he can’t do it, knows he has no such power. He is just playing to the gallery. He tried it in Rivers state, came to manipulate and tried to put some guber aspirants, but we saw the results. We dealt with him.”

On the embattled PDP national chairman boasting no one can sack him, Wike said, “It’s most unfortunate. Nobody has said Ayu should be sacked. Sacking and keeping to your promise are two different things. By our party constitution, there must be zoning for elective parties and political offices.

“Knowing full well that there is no way the presidential candidate and national chairman should come from one zone, Ayu then said if the candidate comes from the North, I will resign to allow the South to produce the national chairman.

“What we are saying is that as a man of honour, or if he has any honour in him, he should keep to that honour, keep to your integrity, what you said, what he agreed. So the issue of people sacking him does not arise.

“For you to be sacked there are procedures to follow. Nobody has said you are sacked. We are saying if at this point you’re a national chairman who has told Nigerians that this is what you do if that happens and you’re running away from doing that, how do you think Nigerians will now believe you, if you tell them to vote for your party?

“If you say you will not honour or keep to integrity, we have no problem with that thing that is giving you confidence. What we are saying is that we want our party to win, but if you think you can do without keeping to promises you have made, so be it. Saying nobody can sack him tells you the impunity in him.

On PDP’s preparedness to win 2023 presidential election, Wike said, “With this culture of impunity and arrogance now creeping into the party, the country is seeing us as not being serious. Do we really want to win the election with this kind of arrogance and impunity? From what we have surveyed, Nigerians want change, but that is only if the people they expect to bring that change are prepared for it.

“It is not about hiring the media to insult governors. Abuse us the way you want, the truth must be told at all times. It is the day’s election results are coming out you will know those who are really on the ground.

“For me, the party is in a dilemma now because the issue of integrity and credibility is still at play. And we must have to resolve that issue. I can never succumb to anybody to say I’m a slave. We must keep to what our party constitution says. If you won’t respect the construction, so be it.”

“I have also read one Dele Momodu say we shouldn’t cross the line. When did he come into PDP? He came in two weeks to the presidential primary. He is from Edo state, not one vote, even from his own state in the primary.

“When you are desperate to be recognised, that is when a presidential aspirant turns a spokesperson. Somebody who wants to rule Nigeria has become the spokesman to a presidential candidate.

“Everyone knows how many times Dele Momodu has been to Port Harcourt, from one project inauguration to the other. I’m not going to be a party to anybody wanting to use me to be relevant. If you don’t have any job, say you don’t have a job. I have a job.

“You must have heard what the Governor of Oyo State, Seyi Makinde just said. So this idea of people bragging that they can do without five state governors which they know, not the ones they don’t know, we will see how far they go.

“Luckily for me, I’ve never left this party one day. Never. But for some of them, it’s just to jump around. Like Osita Chidoka, who didn’t get Anambra PDP guber ticket, left and ran for another party.

“I will remain in the party and fight for our rights. I’m not looking for a job, not looking to be a minister. Most of them are con men. If they say I’m not relevant, we will show who is relevant during and after the elections.”