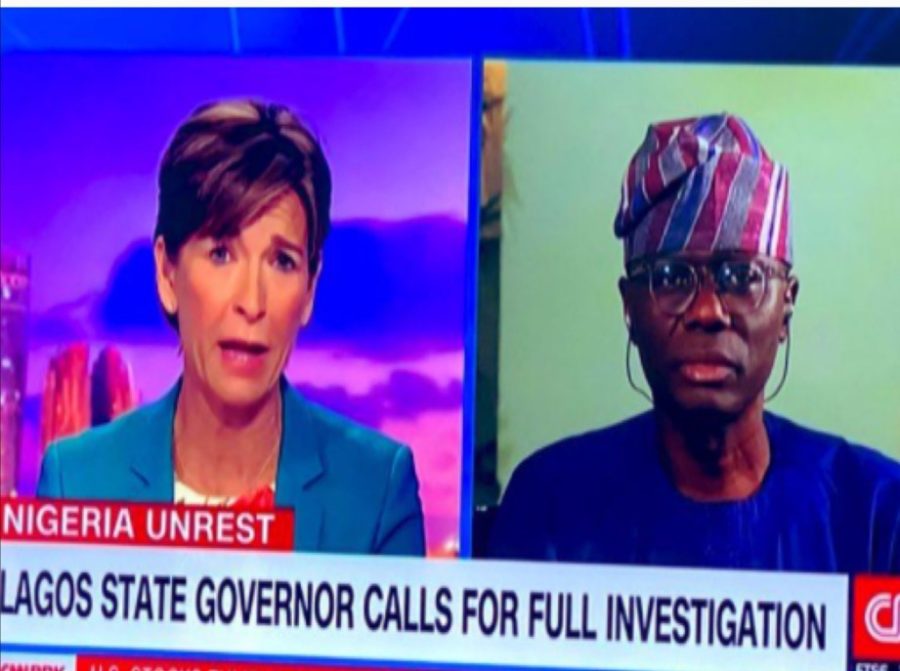 Although the Lagos government will ensure the fatal shooting of peaceful protesters at the Lekki toll gate is investigated, only the Commander-I

Sanwo-Olu suspends Lagos building agency GM over collapse of Ikoyi building, sets up probe panel
#EndSARS: LASG sets up N200m compensation fund for victims
#EndSars: Sanwo-Olu reveals details of meetings with Buhari, IGP as well as identities of officers who brutalised protesters
Although the Lagos government will ensure the fatal shooting of peaceful protesters at the Lekki toll gate is investigated, only the Commander-In-Chief of the Armed Forces can ensure soldiers found culpable are punished, Governor Babajide Sanwo-Olu has said.
Sanwo-Olu in an interview on CNN, also said he had reviewed the CCTV footage and was sure men in military uniform fired shots at the peaceful protesters on October 20. He said the CCTV footage will be made available to a judicial panel he set up to investigate the incident.

The Lekki toll gate shooting which has been condemned by many Nigerians and the international community including the U.S. government. At least seven people have been confirmed dead from the shooting with witnesses saying over a dozen people were killed. The Nigerian Army is yet to admit that its officers fired at the unarmed protesters.

Speaking, Sanwo-Olu said “from the footage that we could see, because there are cameras at that facility, it seems to be that they would be men in military uniform who should be Nigerian army or something.”

President Muhammadu Buhari is the Commander-In-Chief of the Armed Forces to whom the military reports. The president has been criticised for failing to condemn the shooting of unarmed protesters in Lekki and other places. His office has, however, said the president is awaiting an investigation of the Lekki incident before reacting.

Meanwhile, the judicial panel set up by the Lagos State Government will commence sitting today, Tuesday. It will look into all cases of police brutality, including the Lekki shooting. Speaking on the panel, Sanwo-Olu said people who have claimed that their friends and family members were killed in the Lekki incident should bring their case to the panel. He said the judicial panel of enquiry will investigate the cases and make restitution where possible.

The panel, led by a retired justice, Doris Okuwobi, will be sitting at the Lagos Court of arbitration, Lekki.