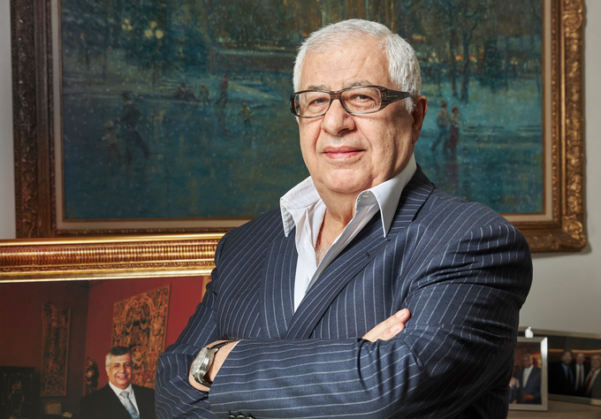 The United States Justice Department on Tuesday, charged Nigerian billionaire, Gilbert Ramez Chagoury with one count of scheming to falsify and concea

According to Society Reporters, a federal grand jury also indicted Rep. Fortenberry, alleging that the Nebraska GOP congressman concealed information and made false statements to authorities. The Justice Department also said Rep. Fortenberry repeatedly lied to and misled authorities during the investigation into illegal contributions made by Chagoury to his reelection campaign.

The 75-year-old Nigerian billionaire of Lebanese descent has been living in Paris, France since 2015, after he fell out of favor with the new political establishment in Nigeria led by President Muhammadu Buhari. Chagoury is alleged to have bankrolled the election campaign of then President Goodluck Jonathan who was defeated by Buhari.

Gilbert and his brother, Ronald Chagoury, who have built a reputation as giants of global philanthropy, are among Africa’s richest men with generous donations to charitable projects around the world. Gilbert’s name is on a gallery at the Louvre in France and a medical school in Lebanon, and he has received awards for his generosity to the Catholic Church and St. Jude’s Children’s Hospital in the USA.

He owns a seven-bedroom hilltop mansion in Beverly Hills in California, and he has a high-level network of friends from Washington to Lebanon to the Vatican, where he serves as an ambassador for the tiny island nation of St. Lucia. His website shows him shaking hands and laughing with Pope Francis.

“I never imagined what the future would hold for me. But I knew there was a vision for my life that was greater than I could imagine.… I consider it a duty to give back,” Chagoury once said of his boyhood in Nigeria.

Since the 1990s, Chagoury has cultivated a friendship with the Clinton family, in part by writing big checks, including an estimated $5 million to the Clinton Foundation, according to its list of donors. At a 2009 Clinton Global Initiative conference, where business and charity leaders pledged to complete projects, the Chagoury Group’s Eko Atlantic development – nine square kilometers of Lagos coastal land reclaimed by a seawall – was singled out for praise.

During a 2013 dedication ceremony in Lagos, just after Hillary Clinton left her post as secretary of State, Bill Clinton lauded the $1 billion Eko Atlantic as an example to the world of how to fight climate change.

By the time Hillary Clinton became secretary of State, the relationship was strong enough for Bill Clinton’s closest aide to push for Chagoury to get access to top diplomats, and the agency began exploring a deal, to build a consulate on Chagoury family land in Lagos.

But even as those talks were underway, other State Department officials were examining accusations that Chagoury had unsavory affiliations, stemming from his activities and friendships in Lebanon. After a review, Chagoury was refused a visa to enter the US in 2015.

Chagoury was born in 1946 in Lagos to Lebanese parents, and as a child attended school in Lebanon. He sold shoes and cars in Nigeria, according to a biography on his website, before marrying the daughter of a prominent Nigerian businessman. In the years afterward, Chagoury’s wealth grew. He has used some of that money to build political connections. His family conglomerate now controls a host of businesses, including construction companies, manufacturing plants, flour mills and real estate.

Operating under the Chagoury Group – an industrial conglomerate founded in 1971 with interests in almost every viable sector in Nigeria; the group’s net worth, according to Forbes, is about $4.2 billion. The Chagoury brothers own the prestigious Eko Hotel & Suites, HITECH Construction Company and ITB Construction Ltd. They are also behind the over $6 billion Eko Atlantic project, which is an entirely reclaimed coastal city built in the upmarket Victoria Island area of Lagos and reserved exclusively for the high net worth individuals and corporate entities including some embassies. Its grand cheerleaders boast that upon completion, the new Eko Atlantic would match New York’s Manhattan.

During the rule of Gen. Sani Abacha, who seized power in Nigeria in 1993, Chagoury prospered, receiving development deals and oil franchises. In the 1990s, Chagoury portrayed himself as an Abacha insider as he tried to influence American policy to be friendlier to the junta. Soon after President Clinton named Donald E. McHenry a special envoy to Nigeria in 1995, Gilbert and Ronald Chagoury visited McHenry in his office at Georgetown University in Washington.

The US was pushing for the return of democratic rule in Nigeria; Abacha, meanwhile, was eager to have Nigeria taken off a US list of nations enabling drug trafficking, McHenry said. Abacha turned out to be one of the most notorious kleptocrats in history, stealing billions in public funds. After Abacha’s death in 1998, the Nigerian government hired lawyers to track down the money. The trail led to bank accounts all over the world; some under Gilbert Chagoury’s control. Chagoury, who denied knowing the funds were stolen, paid a fine of 1 million Swiss francs, (about $600,000), and gave back $65 million to Nigeria; to get his Swiss conviction expunged.

As a non citizen, Chagoury is barred from donating to US political campaigns, but in 1996, he gave $460,000 to a voter registration group steered by Bill Clinton’s allies and was rewarded with an invitation to a White House dinner.

Over the years, Chagoury attended Clinton’s 60th birthday fundraiser and helped arrange a visit to St. Lucia, where the former president was paid $100,000 for a speech. Clinton’s aide, Doug Band, even invited Chagoury to his wedding. Chagoury has also donated to Republicans. He and his brother, along with Eko Atlantic, are listed as sponsors for a 2014 art exhibit at the George W Bush Presidential Center.

In spite of his network of powerful friends, Chagoury has aroused the suspicions of US security officials. In 2010, he was pulled off a private jet in Teterboro, New Jersey, and questioned for four hours because he was on the Department of Homeland Security’s no-fly list. Homeland Security documents show that he was subsequently removed from the list and categorized as a “selectee,” meaning he can fly but receives extra scrutiny. Another Homeland Security document shows agents citing unspecified suspicions of links to terrorism, which can include financing extremist organizations; Chagoury later told reporters that agents asked him what bank he used in Nigeria.

In July this year, Chagoury was in Paris, France to join his fellow billionaires as guests of French President, Emmanuel Macron. The billionaire was said to have made the US his initial new abode, while his younger brother, Ronald held forte in Nigeria. The billionaire was then shuttling London, Beirut and Dubai to attend to business issues until he finally settled for Paris as his new base where he was plucked to be part of Macron’s France-Nigeria Business Council headed by Nigerian billionaire, Abdulsamad Rabiu.

The brothers returned briefly to the spotlight in April 2020 when they significantly boosted Nigeria’s fight against the spread of the deadly coronavirus pandemic with the donation of N1 billion to Lagos State government. For the last three decades, Chagoury spent at least a few months each year in Beverly Hills, where he owns an 18,000-square-foot estate, once the home of actor Danny Thomas, with commanding views of West Los Angeles and the ocean.

A year ago, after his visa application was denied, Chagoury’s mansion was put on the market, with an asking price of $135 million. It’s still on sale.