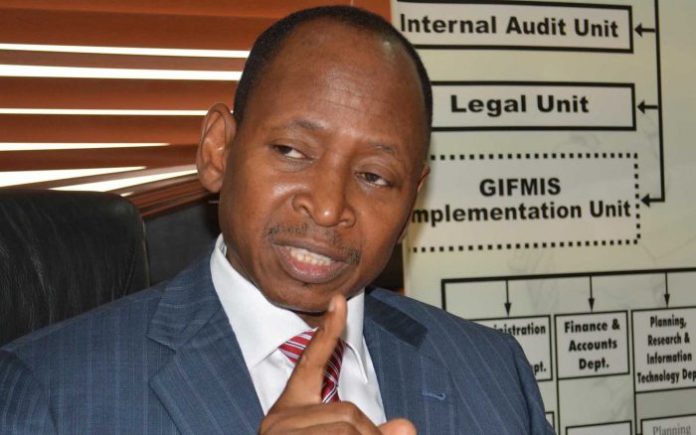 Yesterday, the media was abuzz with news of the arrest of Ahmed Idris, the accountant-general of the federation Idris was arrested by anti-graft ag

Yesterday, the media was abuzz with news of the arrest of Ahmed Idris, the accountant-general of the federation

Idris was arrested by anti-graft agency, the Economic and Financial Crimes Commission, EFCC for diversion of funds and money laundering activities to the tune of 80 billion naira after failing to honour invitations by the EFCC to respond to issues connected to the fraudulent acts.

This whooping sum was stolen through bogus consultancies and other illegal activities using proxies, family members and close associates and The funds were laundered through real estate investments in Kano and Abuja.

But beyond these charges, who exactly is Ahmed Idris?

Idris came into the public’s consciousness when he was appointed as accountant general on June 25, 2015, to succeed Jonah Ogunniyi Otunla who was sacked by President Muhammadu Buhari on allegations of misappropriating N2.5 billion of security agencies’ funds.

In 2019, he was reappointed for another tenure of four years by Buhari but in 2020, after he attained  the mandatory retirement age of 60 years, having worked for 35 years, Idris refused to retire.

This was clearly against the civil service rules, which states that a career civil servant must disengage from service either after attaining 60 years of age or having worked for 35 years, whichever comes first.

Instead, he went lobbying senators, governors, and emirs to convince Buhari to retain him, even writing the Secretary to the Government of the Federation, Boss Mustapha, insisting that he is a political appointee and therefore not bound by civil service rule.

Despite protests from different quarters refuting his political appointee claim, Buhari in his characteristic manner to uphold nepotism, allowed him to carry on.

Besides cooking up controversy with his retirement, Idris all through his tenure, up until his arrest, continually dipped his hands in the cookie jar.

He looted so much from the nation’s coffers he grew to become the wealthiest civil servant in the entire northern region on account of the wealth he amassed which is nothing compared to what Andrew Yakubu, the former group managing director of Nigeria National Petroleum Corporation, looted and kept in hiding.

Idris is worth more than 250 billion naira both in asset and cash.

He owns one of the biggest real estate portfolios, acquiring over 300 properties in Abuja and Kano where he is from.

He bought the famous Sokoto Hotel in Kano for 500 million naira, demolished it and built the largest shopping mall in Kano.

The first sign that showed publicly that Idris is a criminal masquerading as a hardworking civil servant was when in 2018, over ₦106 billion got missing from the budgets of ministries, departments, and agencies (MDAs).

This wasn’t discovered until 2021 when the Socio-Economic Rights and Accountability Project reviewied the 2018 Office of the Auditor General for the Federation report.

But up till date, Idris is yet to account for that money but may likely do now that he has been arrested.

To consolidate his wealthy status, Idris married Hussain, a 16 year old girl as his fourth wife against the wishes of the family of the teenager.

He reportedly lured the girl with gold worth over N200 million, iPhones, state of the art cars, millions of naira in cash, all to buy her attention.

Hopefully, the EFCC succeeds to convict him for his fraudulent crimes and he gets to do time in jail and hopefully too, he ends up not getting a presidential pardon like former governors Jolly Nyame and Joshua Dariye, both of who looted their respective states dry.