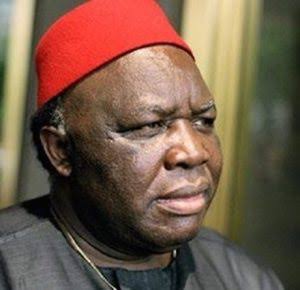 A former Nigerian ambassador to the United States, Israel, and Cyprus, Prof. George Obiozor, has emerged President-General of the Igbo socio-c

Obiozor emerged in an election held at Dan Anyim stadium in Owerri, the Imo state capital, on Sunday.

This is as other candidates for the position of the President General boycotted the election.

Meanwhile, one of the leading contestants for the post of Secretary-General of Ohanaeze Ndigbo, Chief Chuks Ibegbu, had announced his withdrawal from the election.

Ibegbu, who is the outgoing Deputy National Publicity Secretary of the body, lamented that the election process was faulty and lacked proper democratic rules of engagement.

He said, “Following obvious distortion of the proper democratic rules of engagement and feeling the pulse of the Igbo Nation, I hereby exclude myself from the Nwodo led Ohanaeze election. Though I purchased the nomination form at an unacceptable sum of N300,000, regrettably the process was full of manipulation and the outcome would not be acceptable to Ndigbo.”

Obiozor’s emergence as the president-general comes a month after he suddenly collapsed at a meeting held was called to resolve differences arising from the 40-man list of electoral committee members for the election submitted to Ime-Obi Ohanaeze by the President-General, Chief Nnia Nwodo.

78 year old Obiozor during the meeting, began to shiver where he was seated and someone close to him called for help. While he was being helped out of the hall, he slumped and started talking incoherently.

Efforts to resuscitate him failed as he was moved into his car and accompanied by an ambulance belonging to the Enugu State Government and driven out of the meeting venue. While being rushed to the car, Obiozor was heard screaming intermittently.

Almost two weeks after he slumped, he was back on his feet again,