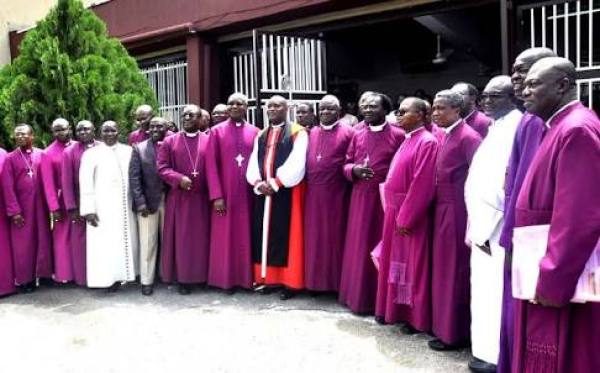 Anglican Bishops have rejected the Supreme Court judgment on the 2019 Imo State governorship polls, which sacked Emeka Ihedioha of Peoples Democratic Party, PDP, and replaced him with Hope Uzodinma of All Progressives Congress, APC, and called for the reversal of the judgment.

Describing the Supreme Court judgment on Imo as wicked and corrupt, the Anglican Bishops warned that failure to reverse the decision could attract the wrath of God on the Supreme Court justices. Consequently, the clerics called for the immediate resignation of Justice Tanko Mohammed as the Chief Justice of Nigeria, saying he is not qualified to head the nation’s judiciary.

The Anglican bishops, who spoke through the Archbishop of Enugu Province, Dr. Emmanuel Chukwuma, described the judgment as kangaroo and unacceptable to the people of Imo State.
“I am speaking the minds of most of the Bishops of the Anglican Church that we are very much discontented and very much in disagreement with the kangaroo judgment of the Supreme Court on what has happened in Imo State.

“We sincerely feel disappointed with the Chief Justice of Nigeria, who has not got his facts correct and we feel that, that judgment is wicked and corrupt. We also feel that the conclusion of the last judgment of yesterday (Monday) was as a result of fear of what will happen in Nigeria because of the reaction to their judgment on Imo State and so, they quickly made others to say pass, pass, they have a hidden agenda.

“And so, we are calling on the Supreme Court to reverse their judgment on Imo State before they will see the wrath of God. There is no way Imo State people could have voted for APC with the bad governance of Okorocha, for which in the House of Assembly APC has no single seat during the election. Hope Uzodinma is my friend; I am not against him but I am against the Supreme Court justices who mutilated the result, judging the case on the total votes that were more than accredited votes, which is absolutely incongruous and very much antithetical to democracy spirit.

“It is, therefore, our prayer that the Independent National Electoral Commission, INEC, should also be up and doing in their declaration of results and be able to defend whatever they declared in the sight of the Supreme Court. In fact , we are calling on the resignation of the Chief Justice of Nigeria. He should go, he is not a lawyer, he is a Sharia Court man; he is not a learned man. We are calling for his resignation with immediate effect.

“With him now, he has really shown Nigerians that General Buhari, I call him General because he is doing what he is called to do, had an agenda to remove Onnoghen to perpetrate what is happening now, which is capable of causing another civil war in Nigeria after 50 years.

“We also pray that Father Ejike Mbaka should desist from his distortive prophecy and face his ministry. We call on the Catholic Church to call him to order. He is politicising his ministry too much and commercialising his ministry and that is dangerous to the ministry of the church and this we totally condemn.”