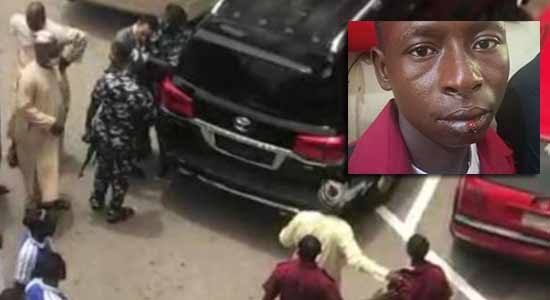 ‘He threatened to jail me,’ says hospitalized guard assaulted by CCT chairman as NBA begins investigation into assault

The security man who was assaulted by Danladi Umar, chairman of the Code of Conduct Tribunal (CCT), in Abuja, says that the CCT boss threatened to jai

The security man who was assaulted by Danladi Umar, chairman of the Code of Conduct Tribunal (CCT), in Abuja, says that the CCT boss threatened to jail him during the assault on him.

The guard who declined to give his full name for fear of his life, recounted how Umar stepped on his mouth, causing him severe pain and injury.

His claim was corroborated by Dennis Omala, his manager, and another colleague of his, both of who witnessed the scene at Banex Plaza, Wuse 2.

The duo also said police officers from the Maitama division came to invite the guards present to the station but “we refused since we have been asked to write a statement (on what happened) and we have done that.”

Umar was caught on video physically assaulting the security man at the plaza when he visited the area on Monday.

In his defence, the CCT chairman said the guard was rude to him when he asked him to park his car properly.

A statement issued on his behalf by CCT spokesperson, Al-Hassan and riddled with bad English, had said the man “was rude in his approach and threatened to deal with chairman if he refused to leave the scene.”

Narrating his experience to TheCable, the guard said that he had approached Umar after his car was wrongly parked within the plaza’s premises.

“When he parked, I went to meet him and said, ‘oga, you parked on the road, adjust your car (because) even a car cannot be able to pass there.’ The man just came down from the car and slapped me,” he said.

“His driver also came and joined hand to slap me. He pushed me to the ground and went to his vehicle to pick iron to come and hit me. That is when someone came and held his hand and told him, ‘upon all you are beating this guy, you want to use the iron to hit him’.

“From there, I called my supervisor to quickly come and see what is happening. When my supervisor came, he asked what was wrong and the man was saying he will not leave me. He sent the other man (his driver) to go to his house and bring DSS (Department of State Services) to come and jail me; he said he will jail me.

“When the DSS came, as I was trying to talk, he gave me a slap in their presence and said I should get down on my knees. When I knelt down, the man came with his leg and broke my mouth and my cheek. That was when I fell down.”

The guard further said police officers from the Maitama division arrived at the scene and took him to the divisional headquarters where he was made to write a statement. He was at the station until late evening when his lawyer and manager were able to secure his bail, he added.
“He (Umar) said he is going to jail me; that he has jailed lots of people and they cannot come out unless he says so. He said he is the one that is fighting Saraki (Bukola Saraki, former senate president) and many people. I have an injury on my chest, my mouth and my neck. Since that Monday I have been in the hospital treating myself. I am even in the hospital now.”

Meanwhile, the Nigerian Bar Association (NBA) says it will investigate the circumstances surrounding the assault. Reacting to the incident, the NBA in a statement signed by Rapulu Nduka, the association’s spokesperson, said as a member of the legal profession, Umar ought to maintain high professional conduct.

“In view of the foregoing, the NBA shall through its relevant committee, investigate the circumstances leading to the altercation, and depending on its findings, will ensure that appropriate action is taken to address this occurrence,” the NBA said.