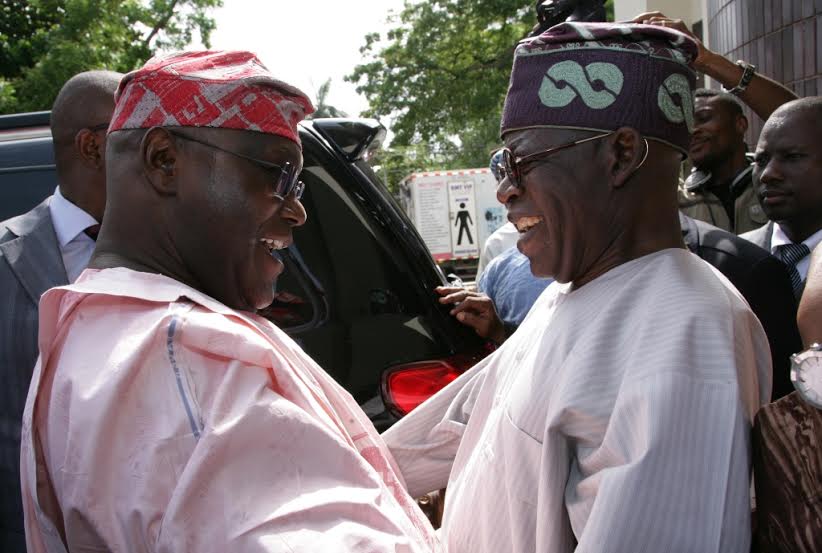 The fight against corruption has been a top campaign issue in Nigeria’s last two presidential elections, but the history of graft allegation

When Obasanjo brutalised Atiku, I saved him; I was there when Yar’Adua chased Ribadu with axe – Tinubu
Atiku picks Delta governor, Okowa as running mate
Wike distances self from suit seeking removal of Atiku as PDP’s presidential candidate

The fight against corruption has been a top campaign issue in Nigeria’s last two presidential elections, but the history of graft allegations surrounding the two main candidates means neither is likely to raise it in the run-up to February’s vote.

Front-runner Bola Tinubu, who secured the ruling party’s nomination earlier this month, was being investigated by the country’s anti-corruption agency as recently as last June. Three decades ago he fought a lawsuit in which the US government accused him of laundering the proceeds of heroin trafficking and eventually reached a settlement.

Atiku Abubakar, his chief rival, brought tens of millions of dollars of suspect funds into the US when he was Nigeria’s vice president in the 2000s, according to a US Senate report, and was implicated in a bribery case that resulted in the imprisonment of an American congressman. Neither episode resulted in charges against Abubakar.

The next president will face a daunting challenge to turn around Africa’s largest economy. Falling oil production threatens Nigeria’s place as the continent’s biggest crude producer, inflation is soaring and more than half of the working-age population are either unemployed or underemployed.

The local currency has depreciated steeply under outgoing President Muhammadu Buhari, falling from around 220 naira to the US dollar on the widely-used parallel market when he was first elected in early 2015 to about 600 naira this week.

Nigeria vies with India as the country with the highest number of people living in extreme poverty despite having a seventh of the population. Meanwhile, secessionists, Islamist militants and armed criminal gangs terrorize large swathes of territory.

Efforts to restore security and fix the economy alone will likely fall short because there’s an unavoidable connection between financial graft and government dysfunction in Nigeria, said Leena Koni Hoffmann, an associate fellow at Chatham House in London. Corruption “hollows systems out and cripples them from the inside,” she said.

The race will see the two wealthy septuagenarians mobilize impressive political machines built over more than 30 years pursuing power in Africa’s most-populous country. Voters in Nigeria are often offered cash, food or clothing to persuade them to cast their ballots for particular candidates.

On the eve of the last election in 2019, two armored bank vans were photographed driving into Tinubu’s home. “If I have money to spend, if I like, I give it to the people for free of charge as long as it’s not to buy votes,” he told reporters when asked what the vehicles were transporting.

Tinubu and Abubakar have cultivated deep systems of political patronage, according to Hoffmann. Both men excel at “engineering and expanding political networks through co-optation, through channeling and redistributing money and positions and favors,” she said.

Tinubu, 70, who lives in Lagos’s wealthiest neighborhood, says he made his fortune before going into politics by investing well and working as an accountant for companies including Deloitte LLP. Abubakar, 75, who splits his time between Nigeria and Dubai, spent two decades working for the government’s customs department and co-founded a large logistics and oil services firm that has operated concessions at Nigerian ports.

While Buhari insists he has made some headway in reducing graft, Clement Nwankwo, executive director of the Policy and Legal Advocacy Centre in Abuja, said he has “failed woefully”. Still, corruption is likely to take a back seat this election to more pressing issues, particularly “the incredible levels of insecurity across the country and the rise in poverty,” he said.

Nigeria ranked 154th out of 180 countries on Transparency International’s 2021 Corruption Perceptions Index, an all-time low. Inaction against those implicated in wrongdoing has created a sense of impunity and stalled the fight against graft, the Berlin-based watchdog said.

Tinubu won the ruling All Progressives Congress party’s primary in a landslide on June 8. A former two-term governor of Lagos state first elected in 1999 and the most powerful politician in southwestern Nigeria, he has handpicked his three successors and been dogged by allegations of lawbreaking for decades.

As of last June, the Economic and Financial Crimes Commission had an open investigation into Tinubu. The agency’s chairman, Abdulrasheed Bawa at the time, without specifying what it was scrutinizing.

Tinubu is also accused in an ongoing Nigerian high court case of secretly controlling the company that handles Lagos state taxes and is entitled to take a 10% cut of what it collects. It was awarded the contract while Tinubu was governor.

The firm’s founder sued Alpha Beta Consulting LLP and Tinubu in June 2021, alleging the company had wired out millions of dollars in “suspicious monetary transfers” and denied him his share of profits for more than a decade. The plaintiff and ABC are currently discussing an out-of-court settlement.

In July 1993, when Tinubu briefly served as a Nigerian senator, the US government filed a forfeiture lawsuit in Chicago against bank accounts in his name, claiming there was “probable cause” to believe they held the proceeds of heroin dealing. The case followed a probe by the Internal Revenue Service and other agencies into a trafficking network involving Nigerian suppliers.

The IRS secured warrants in January 1992 to seize almost $2 million, according to court filings. While living in Chicago between 1989 and 1991, Tinubu had deposited more than $1.8 million into one of the accounts, before transferring large sums to another bank, according to the US government’s complaint. While disputing the US’s reason for targeting the accounts, Tinubu settled in September 1993, agreeing to give up $460,000 to the US government in exchange for the release of the rest of the money. Tinubu wasn’t indicted over the matter.

Abubakar is the main opposition Peoples Democratic Party’s candidate. Nigeria’s vice president from 1999 to 2007, he has run in all four subsequent elections. Abubakar came second when Buhari was re-elected four years ago — and during that campaign was granted a temporary suspension of a US travel ban connected to bribery allegations because he had a reasonable chance of winning, according to a person familiar with the matter.

A report published in 2010 by the US Senate’s Permanent Subcommittee on Investigations said one of Abubakar’s wives helped her husband bring more than $40 million in “suspect funds” into the US while he was Nigeria’s vice president, including at least $1.7 million in bribes paid by Siemens AG. Abubakar and his then spouse previously have denied any wrongdoing.

Former US Representative William Jefferson was sentenced to 13 years in prison in 2009 for taking bribes from American companies interested in doing business in Nigeria and Ghana. In July 2005, Jefferson told a cooperating witness that then-Vice President Abubakar had also agreed to accept a bribe in exchange for his assistance, according to the Louisiana congressman’s indictment. Abubakar has previously rejected the allegations, saying he had no personal or business relationship with Jefferson.

Abubakar’s hopes of succeeding President Olusegun Obasanjo in 2007 were torpedoed when the EFCC declared him unfit to hold public office and a Nigerian Senate panel recommended his prosecution for allegedly diverting government funds. Abubakar denied the allegations, saying he was the victim of political persecution.

Both contenders will focus on issues other than corruption while campaigning, said Hoffmann. “They know it’s not part of their political image,” she said.