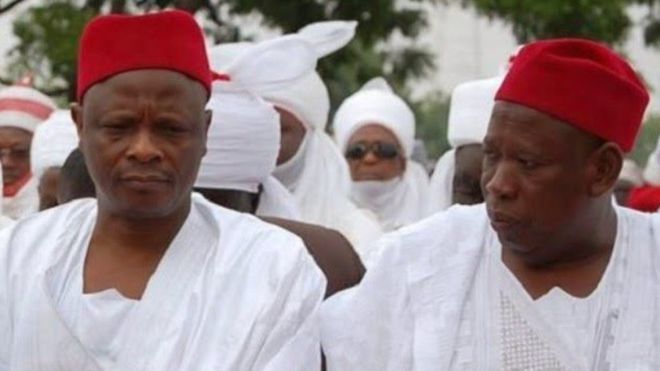 Ganduje drags Kwankwaso to EFCC, says “I am probing him”

Governor Abdullahi Umar Ganduje who was recently in the eye of the storm with the release of videos of him receiving part of a $5m bribe from a contractor in the state, says he is probing his predecessor, Sen. Rabi’u Musa Kwankwaso over  multi-billion naira 5 kilometre road projects. Ganduje who dropped the hint yesterday while inaugurating 12 campaign committees for his second term bid, said his government has already taken the matter to the Economic and Financial Crimes Commission (EFCC). Ganduje explained that the EFCC had gone far in its investigation into the matter in terms of how the money meant for the construction of 5 kilometre roads in the 44 local governments of Kano state were diverted for Kwankwaso’s presidential campaign in 2015.

Comrade Aminu Abdulsalam, a commissioner when Kwankwaso was governor, countered Ganduje saying, the allegation raised by Ganduje was nothing but a new amusing topic to divert people’s attention. Abdulsalam, who is the running mate to the PDP gubernatorial candidate, Engineer Abba Kabir Yusuf, confirmed that the contract was conceived and awarded under Kwankwaso’s regime. He, however, said it was awarded from Ganduje’s office when he was the deputy governor and commissioner for local government.
“Let him tell the public how the contract was awarded, what happened to it and who the contractors are. The 5km road project was not the case investigated by the EFCC and is not Ganduje that took the case to EFCC. The EFCC has finished that case,” he said.