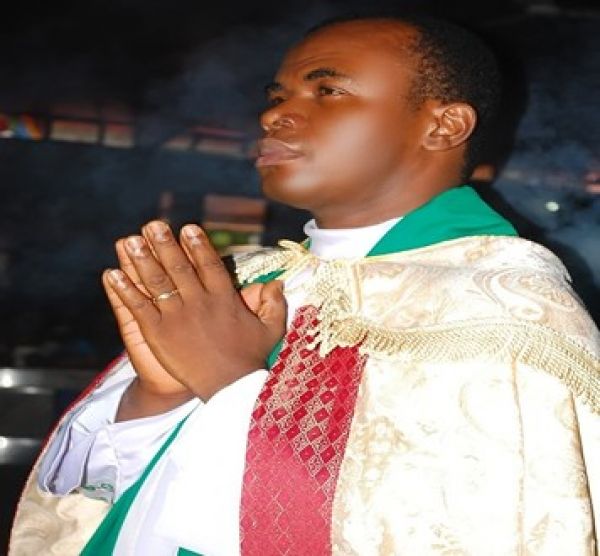 Enugu Catholic advises Mbaka to take time off in solitude, hear from God

The Enugu catholic diocese has advised Rev. Fr. Ejike Mbaka the spiritual director of Adoration Ministry, to take time away in solitude to listen to w

The Enugu catholic diocese has advised Rev. Fr. Ejike Mbaka the spiritual director of Adoration Ministry, to take time away in solitude to listen to what the Spirit of God has to tell him.

The director of communications, Enugu diocese, Rev. Fr. Benjamin Achi, who disclosed this on Monday, October 3, said that Mbaka would likely return to continue his duties in due time.

Achi said that following the proposal for solitude, Mbaka was allowed to propose a priest to administer, in the interim, to the faithful at the Adoration Ministry.

He added that with the approval of Bishop Callistus Onaga, on Sunday, 2 October 2022, Fr. Mbaka introduced Fr. Anthony Amadi to the worshippers to take charge while he would be away.

Achi however noted that this did not go down well with some of the faithful, who insisted that Mbaka must remain.

Recall that Mbaka, had on Sunday, announced that he had been removed from his position as the spiritual director of Adoration Ministry, and this triggered a pandemonium.

Fr Mbaka, who made the announcement during Sunday mass, stated that the bishop of the diocese, Callistus Onaga, had appointed Fr Anthony Amadi as the new spiritual director of Adoration ministry, to be assisted by other unmentioned priests.

Meanwhile, Fr. Amadi, who was present at the mass, was nearly lynched by angry worshippers after the announcement.

The angry mob had already enveloped him, and almost chased Amadi out of the church premises before security personnel rushed to his rescue and guided him to the Father’s house.

Mbaka had barely mentioned the new priest’s name when the congregation erupted into, shouting “we say no,” “we no gree,” and started carrying green leaves, thereby forcing Mbaka to quickly conclude the mass.

Meanwhile, thousands of faithful had excitedly thronged the prayer center from far and wide following an earlier announcement that Bishop Onaga had lifted ban on the ministry.

Adoration Ministry was shut down three months ago by the bishop of the Enugu diocese, Most. Rev. Callistus Onaga.

Onaga had on June 18, 2022, pronounced an indefinite ban on Adoration Ministry in a letter he personally signed to all clerics, religious and lay faithful, directing all Catholic faithful and clergy in the diocese from having anything to do with the Mbaka’s Adoration Ministry.

The cleric declared that Obi could only become president if God ceases to exist, adding that the former Anambra state governor was cursed.

According to Mbaka, it was better to have an old man as president than a “stingy young man.”