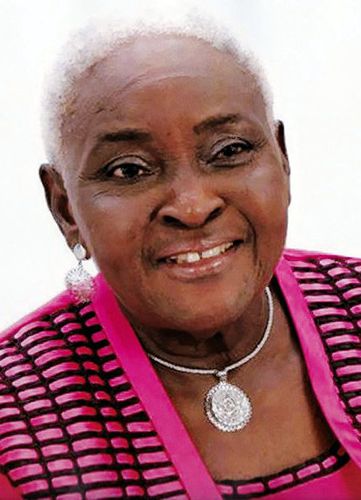 The business mogul’s late wife was the Otun lya Laje and the lya Apesin of Lagos died on Friday January 20 at the age of 83.

She is the mother of Oladipupo Adebutu, the People’s Democratic Party’s governorship candidate in Ogun State.

The matriarch of Adebutu family was married to her husband for over 55 years.

She attended Methodist Girls High School, Yaba from 1952-57 and started work at the Board of Customs and Excise in Lagos briefy before proceeding on a vocational training at the Federal Training Centre, Broad Street, Lagos.

After completing the programme, she returned to the board of Customs and Excise again and worked for a little while until January I963 when she travelled to the UK to study at the Pitmas College for a one year programme in Secretarial Administration.

On her return to Nigeria, she was posted to the Ministry of Health from where she was seconded to the Board of Customs in 1967.

She eventually left the service in 1971 on the request of her husband who wanted her to be a full time housewife.

Sir Adebutu has lost two of his three wives in a space of two years.

In 2021, he lost his second wife, Rosemary Adebutu to the cold hands of death. She reportedly died of complications from COVID-19.

Ironically, she died in January, just the same month, the first wife passed on.