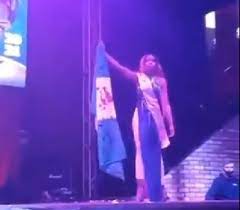 Udeh Chiamaka, a Nigeria representative at the Miss Africa Russia pageant, on Sunday walked the runway with a blood-stained Nigerian flag in appar

Sanwo-Olu sues for calm, apologises to families of #Lekkitollgatemassacre
No leader will be spared during the next protests – HRM Hogan
#EndSARS: LASG sets up N200m compensation fund for victims

Udeh Chiamaka, a Nigeria representative at the Miss Africa Russia pageant, on Sunday walked the runway with a blood-stained Nigerian flag in apparent solidarity with her fellow country people who were killed during the #Endsars protest at the Lekki Toll Plaza, Lagos, Nigeria.

The Miss Africa Russia pageant was held in Moscow, with the ceremony uniting people of various nationalities.

The photo of the red-stained flag had gained prominence last year as a symbol of bloodshed. Citizens also used it to portray the insecurity situation in the country.

In the now-viral video, Udeh is seen walking up the stage while holding up the red-stained Nigerian flag.

Udeh won’t be the first to pull such a demonstration in the background of the insecurity situation in the country.

Comedian, Bovi Ugbomah had appeared at The Headies 2021 with a blood-stained #EndSARS-themed outfit.