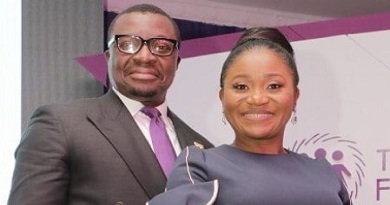 What’s up with comedian, Alibaba’s marriage?

A few weeks ago, there were hush hush talks in some quarters about the state of the marriage of veteran comedian, actor, Master of Ceremony and entrep

A few weeks ago, there were hush hush talks in some quarters about the state of the marriage of veteran comedian, actor, Master of Ceremony and entrepreneur, Atunyota Alleluya Akpobome, more popularly known as Alibaba.

The story was that the comedian and his wife, Mary, had some issues they couldn’t settle amicably, thus forcing him to move out of his home. The conclusion was that his marriage had ended. Also, a post he up on February 14th further lent credence to the talks about his marriage.

Many wondered why on the said day which also happens to be his last child’s birthday, he posted a photograph of his daughter together with his wife with a simply caption devoid of emotion. This is quite unlike him, as he is known to celebrate his wife at any given opportunity. The caption simply read “@mummymary_’s twinnie…. (referring to his daughter) happy Valentines Day to both of you.”

Having been bombarded with calls and messages from concerned individuals, Alibaba had to ‘address’ the issue to prevent talks about his marriage further escalating. While assuring his followers on social media that his marriage is still intact, he reiterated that rumours about his marriage are false and that the rumours started because he was not home for the Christmas and New year celebrations which was due to the fact that he was in isolation having contracted Covid19.

But despite his explanation that things were alright at home, on International Women’s Day, a day that he would usually post the photograph of his wife in celebration of women generally, he instead posted the symbol of 2021 IWD without a caption.

Investigations however reveal that the comedian left home long before the Christmas and New Year celebrations and not because he contracted Covid19. According to a reliable source, he allegedly left home shortly before he embarked on an influencer trip to Dubai with three younger colleagues in the entertainment industry.  The trip happened in November and on November 15th 2020 precisely, he had announced to his followers that he was making a trip to Dubai ‘just to get away for a few days and reset’.

The source also alleged that the matter that forced him to leave home had to do with his wife’s relations and how he was being disrespected.

Well, their 15th wedding anniversary comes up next month. It is our hope that they iron out the issue between them as many still consider them their role models.