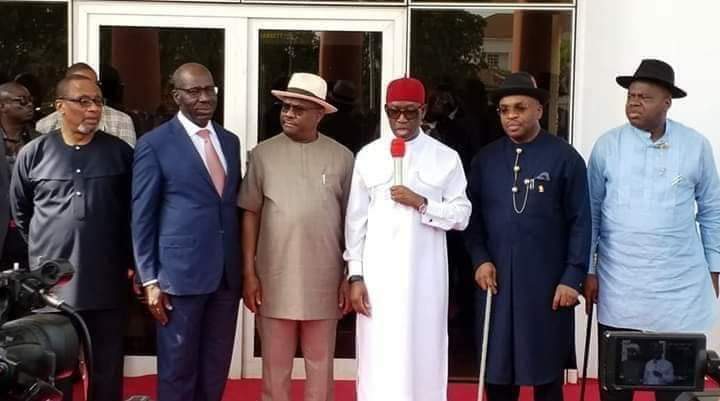 We gave nine governors N100m each as Covid19 palliatives – NDDC

The Niger Delta Development Commission (NDDC) has said that it gave each of the governors of the nine oil-producing states N100million each as COVID-19 palliatives.

NDDC officials reportedly made the claim while appearing before the Senate Committee on Ethics Privileges and Public Petitions.

Chairman of the Committee, Senator Patrick Ayo Akinyelure told reporters that the Senate may summon the governors to testify on how the money was spent.

Akinyelure who added that the NDDC Sole Administrator must appear before it or risk an arrest warrant being issued against him over non-appearance, added that the money given to the Governors is part of N6.25 billion allegedly expended by the NDDC on COVID-19 palliatives.

He reiterated that the petition over the amount spent by the agency on COVID-19 palliatives will not be swept under the carpet.

Akinyelure said; “We have already gone through the process of warrant of arrest and we have reached 95 per cent stage of completion.However, for the avoidance of doubt, immediately the warrant of arrest was issued, representatives of the sole administrator came to my office and verbally explained how the money was spent.

“They claimed that N100 million each was given to the nine state governors in the Niger Delta region. We now asked them to make a written submission on their claims to reach us before March 15 which was Monday but up till today (Tues), we have not seen anything. This particular probe will not be swept under the carpet.

“Therefore, we are calling on the NDDC sole administrator to either produce the Pondei-led interim management committee team or make available the position paper on how the palliatives were shared on or before 3 p.m. on March 18 so that we could study their submissions before March 29th when they are expected to defend their position papers.

“We want to know how many governors pocketed these palliative funds. We are aware that over N100 million each was given to each state governments. That was contained in their verbal submission. We want them to put it in writing. When was this money delivered? How many vehicles were delivered to the governors?”