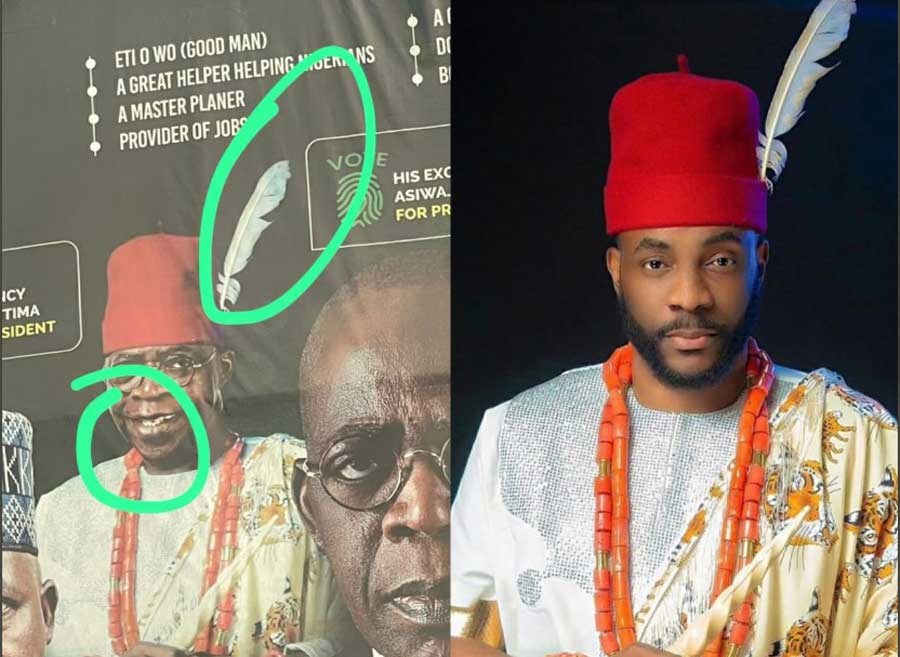 Weeks after claiming a photo of a young Donald Duke, the former governor of Cross River State, the presidential candidate of the All Progressives Cong

Weeks after claiming a photo of a young Donald Duke, the former governor of Cross River State, the presidential candidate of the All Progressives Congress, APC, is deep in another controversy over alleged photoshop of popular TV presenter and reality show host, Ebuka Obi-Uchendu.

In the photoshop trending on social media platforms, Tinubu was seen dressed on native attire with a traditional Igbo red cap and red beads with a clamped fist.

The red cap had a long white feather while the former Lagos State Governor was also wearing beads on his wrists.

He also appeared in another photo donning corporate dress with his right hand touching his chin while his Vice Presidential running mate, Kashim Shettima appeared also dressed in traditional attire.

The duo appeared on campaign posters being erected across the country and are visible at the APC presidential campaign office in Abuja raising another controversy, which many have said is yet another identity theft.

Recall the presidential candidate had to apologise for using the picture of Duke in a documentary that tried to define his personality as a noble man with a humble beginning whose hard work has earned him a place at the topmost part of both the social and political areas of life.

The latest controversy in what has become a messy campaign already for the APC candidate also contained some key elements of his promises.

On the controversial campaign posters, Tinubu promised to anchored his administration on the economy with a promise, “dollar go fall” to mean the Nigerian currency, the naira will perform well against the American currency the dollars, similar to the APC 2015 campaign promise of $1 to N1.

He is described on poster as “a great optimist,” and as opposed to President Muhammadu Buhari’s administration’s closed border policy, Tinubu promised that, “border go open.”

He is also described as a “good man”, who is “a great helper helping Nigerians, a master planner and a provider of jobs.”

The latest claim of Ebuka’s picture which the reality TV host had posted many months ago wearing his wedding ring has been condemned by many Nigerians who decried such an attitude as fraudulent.