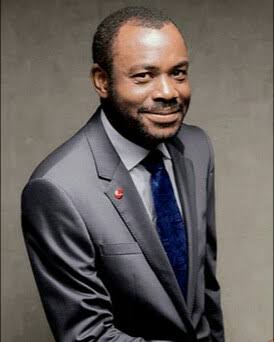 Sterling Bank obviously afraid of getting a sanction from the Advertising Practitioners Council of Nigeria, APCON and a total boycott of its services,

Sterling Bank obviously afraid of getting a sanction from the Advertising Practitioners Council of Nigeria, APCON and a total boycott of its services, has issued an apology over the offensive and blasphemous Easter day celebration message it put out on social media.

The apology is coming on the heels of an outrage from Nigerians who called on.the Federal government, the Christian Association of Nigeria to sanction the financial institution for being insensitive to the Christian faith.

A boycott of the bank was also called for while APCON insisted that it would sanction the bank for putting out material that was unapproved.

In its letter of apology signed by the Managing Director, Abubakar Suleiman, a Muslim faithful, it accepted full responsibility while noting that the editorial processes of the material fell short of the bank’s policy standards.

“On behalf of the Management and Staff of Sterling Bank PLC, I write to tender our unreserved apology to you and members of our nation’s Christian community for our Easter message email of 17 April 2022.

“The content of the infographic and the message it contained was insensitive and failed to consider the very sober nature of the event being commemorated, the resurrection of Jesus Christ.

“While the message had no malicious intent, there is no place for content that fails to fully account for the feelings of billions of people all over the world. Our honest intent was to join our millions of customers in Nigeria and worldwide in celebrating this solemn event, but our execution fell short on this occasion.

“Our policies are clear on what constitutes acceptable customer communication, and this message should not have been released to our customers. On this occasion, our editorial processes fell short of our policy standards.

“As a responsible institution, we immediately withdrew the offensive material and initiated a review of the circumstances that led to this failure. We will further sensitize our workforce to ensure this unfortunate lapse in judgement never repeats itself.

“We thank you for your continued trust in us and apologize again for this unfortunate incidence.” 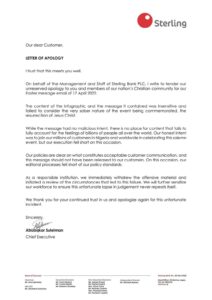 The bank had come under intense criticism for comparing Jesus to ‘Agege bread’ in its Easter message.

“Like Agege Bread He Rose. Happy Easter,” the bank wrote with an illustration in an advertorial on Sunday.

‘Agege bread’ one of the most popular Nigerian homemade breads is known for its puffy, soft, stretchy and chewy texture.

Despite its sweetness, it’s alleged that that the bread is not healthy for eating due to some ingredients used in its production.

According to Christian doctrine, Easter marks the death and resurrection of Jesus Christ and his ascension into heaven.

In essence, the bank was trying to depict that Jesus Christ rose like ‘Agege bread’ known for its puffy nature.

Following outcries and anger over the offensive message, Sterling Bank, rather than show remorse, further displayed arrogance in a follow-up tweet.

The bank said: “Let the one who has never sinned throw the first stone.

“Blessed is the one whose transgressions are forgiven, whose sins are covered. We humbly celebrate His resurrection, the defeat of death and the hope of salvation.”