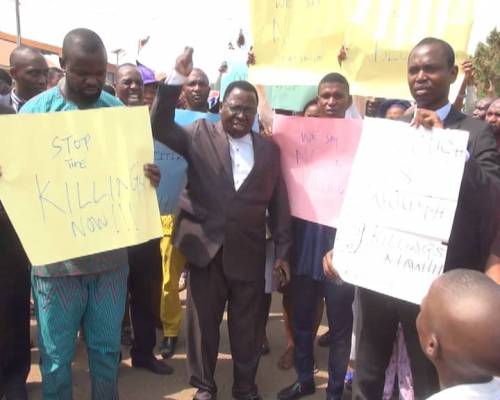 Resign if you cannot protect us– Ondo Christians to Buhari

Christians in Ondo state via a peaceful protest against the incessant killings of some of them in parts of the country on Sunday have asked President Buhari to resign his position if he cannot protect the citizens. The Christians who cut across all churches and carried various placards and banners to condemn the killings walked from first Baptist church Oba Adesida road to converg at the Sacred Heart Cathedral Church with songs and prayers.

They were led the chairman, Christians Association of Nigeria (CAN) in Ondo state, Reverend John Oladapo and other clerics in the state capital. Addressing the Christians, the Catholic Bishop of Ondo diocese, Bishop Jude Arogundade condemned the failure of the federal government to bring those behind killings in Nigeria to book.

“This is the time for us to speak out clearly. If the government can no longer defend Christians in this country, we will defend ourselves. The government has decided to arrest those protesting against the system rather than those who are destroying the system. The government cannot claim not to know those who are behind these killings. If they can no longer handle the security of this country, they should resign. That is what people of dignity do. We have been told that those killing are from outside the country. So some people can just come into this country and go away and not a single one has been arrested? We refuse to accept this.”

He however prayed and commended the governor of Ondo state, Oluwarotimi Akeredolu for standing with the people in this challenging period. Arogundade said “We have heard him clearly and we know his heart that he wants to protect his people and we are here to support him and to support the authorities of our land who want to work hard to support the defenceless.”

He also prayed for the families of those that have been affected by various killings. The CAN chairman in Ondo state, Revd John Oladapo urged Christians to be more vigilant and be more security conscious so as to avert unnecessary security threats around them.